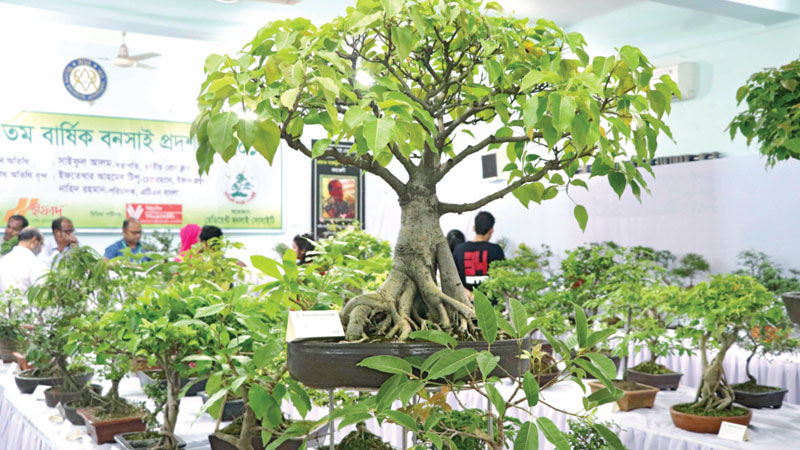 From ficuses and fig trees to bougainvilleas and elms, the Bangladesh Bonsai Society hasn’t found a tree it can’t prune. The society, which this year completes more than two decades of existence, has grown from a handful of members in 1999 – its founding year – to more than 120 active members today.

Each member is an artist of their garden of evergreen plant varieties with spiky needles pruned and guided into traditional bonsai shapes. Some of the trees are their treasured “masterpieces”, almost half a century old.

Contrary to the common belief that bonsai is just a small world of plants, company president Nazma Shafique said it was about creating a certain look. “The bonsai specimen is supposed to look old in the pot. You have to achieve a sense of age in a tree.

She said the idea is “to keep pruning it down to reduce the size of the leaf. If you don’t follow them, a branch can have a long gap before it has a leaf, and it just doesn’t look good. The detail with which the members of the company work to create the best bonsai specimens is remarkable!

“Bonsai is an art. We work on a living plant, shaping and pruning it to give it an aesthetic appearance. We work like architects. It is also a science, because without knowledge of horticulture and botany, you cannot create a bonsai. And as we are completely immersed in the process, it also becomes a philosophy of life,” Nazma said.

In addition to company meetings and workshops, they regularly facilitate the exchange of ideas with other bonsai companies around the world. Nazma herself was introduced to this art form during one of the workshops she attended with Indian bonsai master Govind Raju in 1997.

Today, her garden is a cheerful picture of more than 40 bonsai trees, each with an artistic touch. Many members live in apartment complexes with beautiful balcony gardens showcasing their green fingers.

According to historical references, bonsai trees were brought from China to Japan as souvenirs in the 6th century. These trees came to adorn the homes of wealthy Japanese people and the “potted trees” became the symbol of Japan. Ironically, while bonsai is now considered an old man’s hobby in Japan, in Bangladesh it’s a thriving passion among plant enthusiasts in the capital, with some setting up their own for-profit businesses. .

In the Bangladesh Bonsai Society, there are at least four members who have turned their passion into small home businesses. Anisul Haq, who also started bonsai as an extension of his gardening hobby, is doing a great business thanks to the growing interest in bonsai in the capital.

“I normally sell specimens that are two to three years old. Bonsai trees can give yields of up to Tk 1 lakh–Tk 2 lakh, sometimes even more. It all depends on the age of the specimen and the complexity of the root system, among other parameters,” he said.

For example, there are 1400-year-old bonsai trees in the Japanese royal palace which are kept as royal heirlooms. According to Borhan Hossain, a bonsai specialist and member of the company that also sells Bondai, landscape bonsai have seen good demand.

Borhan has a terrace garden in the Mohakhali DOHS area which has a wide range of landscape bonsai specimens. “So far, I’ve done it out of passion. With so many requests coming in, I’m now taking orders too,” he says.

Borhan said bonsai today is more or less like a DIY (do it yourself) project. One can start with basic gardening tools and saplings or cuttings, and learn the art on their own. “I also give lessons when a group of people send in a request,” he said.

“It takes a lot of dedication, perseverance, patience, passion and practice to make a beautiful work of art using a plant. For me, it’s a spiritual process, like meditation. I stay connected with each of my creations,” he said.

Adding exotic varieties to the bonsai collection is considered another level of progress for the bonsai artist. Australian ficus, ginseng and Brazilian rain tree are some of the species grown by these ardent city gardeners in their home gardens.

Shahzadi Sultana has the Chinese elm of which she is proud. With more than 30 varieties of bonsai in her terrace garden, Shahjadi said exotic plants need a little more attention.

“During the summers, these cannot withstand too high temperatures,” she explained.

Shahzadi said creating bonsai requires a lot of dedication and especially visualization. “The fact that you take a plant, visualize it as a large tree, and help it grow into a miniature tree, seeing the change every day while retaining its genetic characteristics, that’s what makes bonsai so innovative and unique,” she said. .

Since the necessary moisture content is essential, bonsai should be watered every day and need sun every three days, she added.

The plant is initially kept in a large pot until it reaches maturity. “Then we visualize the shape the tree would take and wire the branches using flexible copper wires. You have to keep changing the wiring until you get the shape you need, which takes a lot of skill,” she said.

The plant is then transferred to a shallow container where it grows for about six months before being moved to a shallow porcelain container. A bonsai must be repotted every one and a half years, she added.

Single-shoot monocotyledonous plants such as coconut, areca nut or palm cannot be made into bonsai. In Bangladesh, bonsai mainly belong to ficus species like peepal or banyan, Shahzadi said.

“Some people think that you restrict the natural growth of a tree, but the plant has the ability to adapt to a pot. So it’s definitely not unnatural or cruel,” Shahzadi said.

The case of bonsai CIA