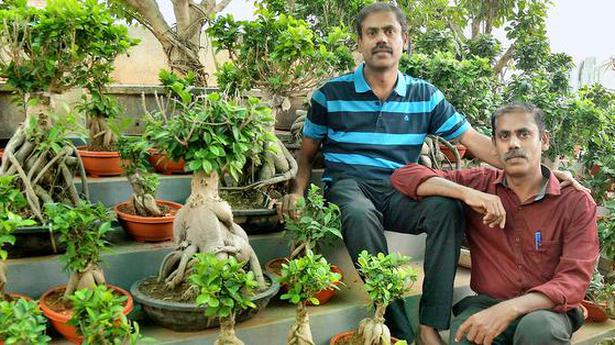 Bonsai, a craft for the soul

Looking at the perfectly formed miniature banyan tree thriving in its flat-bottomed concrete container, it’s hard to believe the plant can be over 40 years old.

“Fifteen years ago the banyan tree was actually growing in a crack between the walls of an old building in Bangalore, and the owners wanted to uproot it. I removed the young tree and replanted it first in the soil, then into smaller and smaller containers, pruning the roots each time to make a bonsai version of the original,” G. Lakshmanasamy, a Tiruchi-born software professional who recently started a nursery and an exhibition area for his collection of mini-plants in the city, told
The Hindu .

Bonsai is an ancient Chinese horticultural technique (later refined by the Japanese) of growing miniature versions of plants and trees in an aesthetic way. While the Chinese cultivated entire landscapes in bonsai, the Japanese focused on individual trees.

Mr. Lakshmanasamy shares his passion for art with his cousin G. Ramasamy, a primary school teacher in Tiruchi.

They collaborated to create Bodhi Nursery and Aquarium at Dhanaratnam Nagar in old Paal Pannai, and much of the exhibition area is taken up with their collection of around 25 bonsai projects including banyan trees, adenia, cacti and crassula (jade plant).

Visitors can also see a mini religiosa (Peepul) tree that was transplanted from an open pit seven years ago.

“Twenty years ago, as a newcomer to Bengaluru, I was struck by a specimen of a 70-year-old bonsai banyan tree which was displayed at the Lal Bagh Flower Show, and immediately wanted to know how I could grow something similar,” recalls Mr. Lakshmanasamy.

Unable to afford this bonsai, he repeatedly visited the gardener, a seasoned municipal employee who used to create dwarf versions from the plants that had been cut during road clearing works in Bangalore. “I realized that it’s a job not only for the hands, but also for the soul,” he said.

Working in Bangalore first in a tissue culture business and later in IT, Mr Lakshmanasamy would bring back plant cuttings to Tiruchi which he and Mr Ramasamy would tend to on the terrace of their family home in Old Paal Pannai .

“We decided to start a nursery together after friends suggested that more people would like to learn more about this ancient horticultural craft. And you can start with existing saplings rather than seeds,” Mr. Ramasamy.

The nursery has a website and WhatsApp number to contact people interested in developing the hobby locally. It also offers seedlings of regular plants for home gardens.

While samples start from ₹500, the cousins ​​admit they wouldn’t have the heart to sell some of their old bonsai plants due to their sentimental value. “People are amused by our obsessive love for bonsai, but we consider them our most prized possessions…they will be our inheritance for our children,” Mr. Lakshmanasamy said.

The art of bonsai: imitating the shape and scale of a mature tree