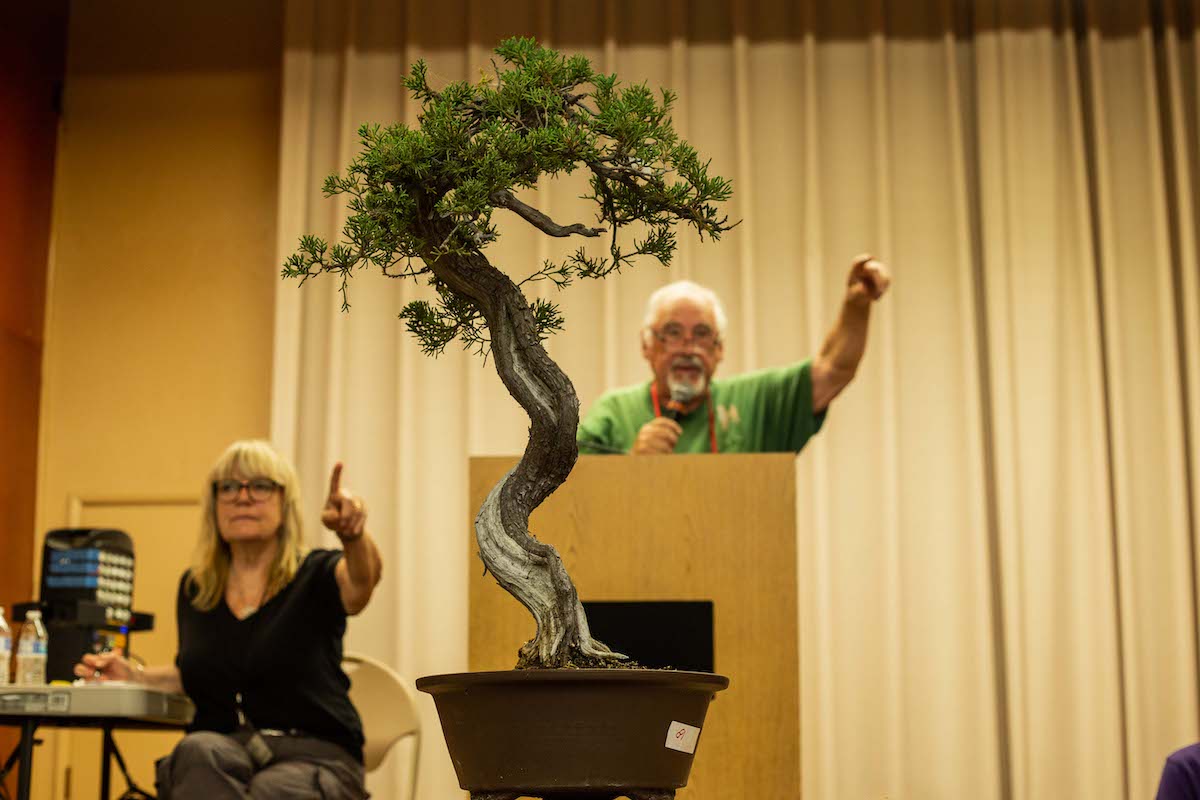 When Dennis Makishima started collecting bonsai trees around 40 years ago, he always had an end in mind. That end finally came last Saturday, when he and his wife Joanne donated their entire collection of hundreds of bonsai trees to Lake Merritt’s Bonsai Garden for public auction.

In the makeshift auction hall at the Lakeside Park Garden Center in Oakland, bidders peered under the canopies of the sculptural trees that line the wood-paneled walls. Some trees towered over the crowd, while others were small enough to fit in one hand. At 11 a.m. the room was full. More than 100 bonsai were to be auctioned, and another 500 were waiting in the adjacent hall for a post-auction sale.

George Haas, marketing manager of the Bonsai Garden at Lake Merritt, said the 200 auction spots were gone in two hours.

“We turned down a lot of people, unfortunately,” Haas said.

The first tree, a medium-sized maple, sold for $400. The second, a pine with branches that fell below the pot in a lace pattern, sold for $1,500 to Bob Pressler, who flew in from Los Angeles to attend the auction. Pressler, owner of Kimura Bonsai Nursery, has been collecting plants since she was 10 years old. At the auction, he bought a tree for his personal collection and a few more that he plans to work on and sell later in his nursery.

“These trees have been in pots for decades and they’re really, really old, and there are things we can do to make the trees look old but there’s a quality they get when they’re in pots for a long time that you can’t get any other way,” Pressler said.

On the auction block were a few dozen black pines from the mid-1950s to early 1960s. Many of these are believed to have been planted from seed in the 1950s by Japanese Americans after being released from World War II internment camps.

Makishima, who chose not to attend the auction, said many Japanese Americans in California before World War II were gardeners and pine seeds were readily available to them. He said they often use inexpensive techniques to shape the trees, such as bending branches with fishing weights instead of wire and using fish emulsion as fertilizer.

“I inherited a lot of things from the old Japanese-American community, and you don’t inherit pristine things,” Makishima said. “It took me a long time – 20 years – to restore them.”

This is partly why Makishima knew he wanted to donate his collection when it was at its peak. He had seen many bonsai owners grow too old to care for the trees and had seen their collections suffer. He promised himself that at 75 he would also pass on his collection. So when he turned 75 in February, that’s exactly what he did.

“My collection was at its peak in terms of maturity, the completion of artistic purpose,” Makishima said. “I pass them on to whoever can continue the tradition.”

The tradition started in China, and later was adopted and transformed by the Japanese who gave it the name bonsai. The trees are planted in shallow pots and meticulously pruned and shaped over their lifetime to achieve the desired shape. Almost any plant can be turned into a bonsai with enough patience and skill, although certain varieties and characteristics are highly valued. Native species are often used because they have a better chance of surviving local conditions. Gardeners sometimes collect a variety of species from the wild, called yamadori, by repotting and pruning and training them to become bonsai trees. Makishima’s collection included a variety of native California pine, maple, juniper, cedar, and yamadori trees.

Makishima has deep ties to the Lake Merritt Bonsai Garden, which opened in 1999 and was the brainchild of local horticulturists. Toichi Domoto and Bill Hashimoto. Makishima helped create and build the garden he calls a “museum,” where many bonsai trees began as neglected trees donated by community members.

According to Haas, the auction and sale of the collection of Makishimas raised over $130,000, a record high for the Lake Merritt Bonsai Garden. Proceeds will fund the Dennis and Joanne Makishima Curator Fund which is dedicated to the Oakland Garden. The auction was organized and run by volunteers from various Northern California bonsai clubs, including the East Bay Bonsai Society and the Marin Bonsai Club.

The highest bid at the auction was for a California juniper – a tall specimen with a thick, dramatic twisting trunk. The tree sold for $4,400. Donald Dang, a 20-year-old bonsai collector who participated in the auction as a bidder, said the tree’s value is likely due to its bark rather than its shape.

“One of the reasons the California juniper is valuable is that its twisted wood shows that it has lived in a very harsh environment, hence its beauty. The light-colored dead wood and the dark-colored live wood are intertwined, and it fits with an ancient Asian philosophy of life and death,” Dang said.

Of his impressive collection, Makishima only kept three trees, and he said that soon he would probably only have one. Eventually, he plans to part with it as well.

“I’m relieved because I don’t have bonsai in my garden anymore,” Makishima said after the sale. “I am moving into another phase of my life now. I had 40 wonderful years, no regrets.

A visit to the stunning Canberra National Arboretum