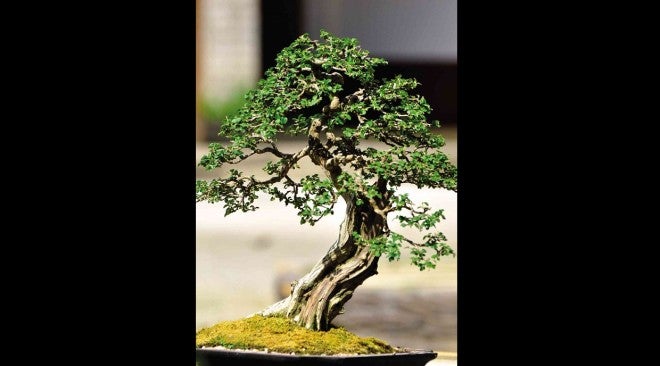 ONE of the bonsai creations on display in Tayug, Pangasinan, where bonsai making is gaining momentum. WILLIE LOMIBAO/CONTRIBUTOR

In the northern provinces of Pangasinan and Ilocos Norte, tree lovers grow small.

In the city of Tayug, Pangasinan and Batac City in Ilocos Norte, the manufacture of bonsai becomes a fashion.

More and more people, not only in Tayug, but also in neighboring towns in eastern Pangasinan, are now taking up bonsai making, not only because the hobby is relaxing, but also because that the necessary materials are abundant.

Bonsai refers to an ornamental tree or shrub that is grown in a pot with the use of special methods to control its growth.

At the week-long bonsai exhibition in Tayug which will end on March 21, among the 60 dwarf trees on display were lagundi, red balete, yellow doggie, gumamela, santan and bougainvillea.

“These plants are beautiful attractions in a house. As a hobby, growing bonsai is relaxing,” said Tayug Bonsai Group member Daryl Amon.

“I’ve been doing this for the past six years and always loved it,” he said.

Amon says to be a good bonsai grower, you have to have an eye for art. This is important, he said, for a material to be neat into an aesthetically appealing form.

“If you have an eye for art, you would immediately have an idea of ​​how a material can be transformed into a beautiful bonsai tree as soon as you see it,” he said.

At least 30 students make up the first batch that would be trained as bonsai technicians. The practical course lasts about six months.

Dr Miriam Pascua, President of MMSU and an expert in plant biology, said that knowing the art of bonsai making is simply not enough, so “we need a school to meet the global demand of bonsai technicians, especially in Asia, Europe and the United States.”

“It’s not just about knowing the art, we have to teach them the science of making bonsai, such as the physiology, anatomy and morphology of these species, because each is different from the other and requires specific treatment,” Pascua said.

“At the moment we have our horticulture students to compose the first batch. It will also be open to out-of-school youth or anyone who loves plants,” she said.

She cited the need for continued research and development for local bonsai making to keep up with the global market.

Augusto Bautista, head of the Department of Environment and Natural Resources (DENR) Protected Areas, Wildlife and Coastal Areas Management Unit in the town of Alaminos, said the collection of bonsai materials in protected areas is prohibited, unless the activity is sanctioned by the agency.

“We have no problem with locally grown materials, such as guava, santan and other readily available ornamental and fruit trees,” he said.

Amon, a member of the Tayug Bonsai Group, said growing a bonsai tree into the desired shape requires patience and skill.

“That’s why we always advise anyone interested in growing bonsai to take a series of seminars first,” he said. He admitted that the hobby is expensive due to the cost of materials.

Bonsai making, however, could be profitable, he said.

The MMSU Bonsai School, through its partnership with the Ilocos Norte Bonsai Society, will also conserve and care for endangered plant species, including bonsai planting material seized by the police. Gabriel Cardinoza and Leilani Adriano, Inquirer Northern Luzon

Tiramisu clay and a mousse parfait: we feast on bonsai trees at the Tokyu Hands Cafe