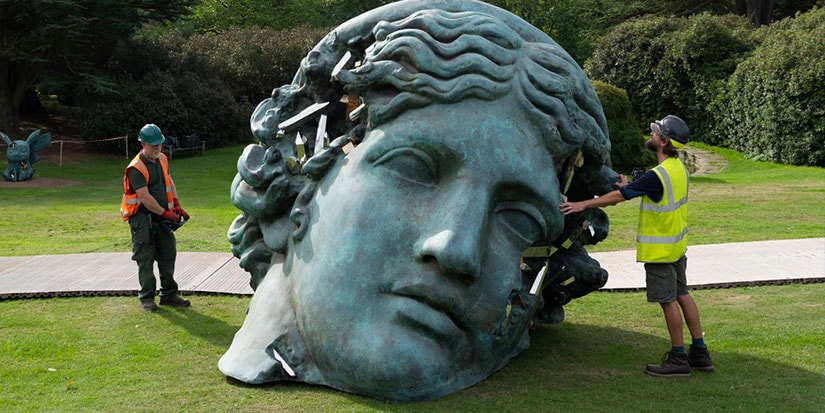 To celebrate Frieze London, the UK’s next art showcase, multidisciplinary artist Daniel Arsham is set to unveil his first-ever exhibition in a UK museum, which will take place at Yorkshire Sculpture Park in Wakefield.

Comprised of six large-scale bronze sculptures, Arsham’s new work, titled “Relics in the Landscape”, seeks to exist in harmony with the natural landscape. Located in the park, which has been inhabited since at least the 11th century, the Arsham sculptures exist as “archaeological remains of our time”, according to the press release and have been described by the artist as “future relics”. Created in green patinated bronze, the series includes Arsham’s Eroded Bronze Venus of Arles, Eroded Bronze Astronaut, and Crystallized Bronze Seated Pikachu.

Alongside the sculptures, Arsham is set to take over Marylebone-based newsagents Shreeji for a graphic transformation of its storefront as well as a series of limited-edition collectibles. Established in 1982, Shreeji Newsagents has since undergone development under the design studio Selected Works, and now offers a curated selection of magazines and books as well as a multipurpose space for events and exhibitions, as well as a café. Previous collaborators have included the likes of Tracey Emin, Valentino and JW Anderson x Moncler. For the duration of the Arsham takeover, the cafe will see a specially designed Arsham takeaway cup available for purchase.

In other news, check out Richard Quinn’s latest NFT offering.