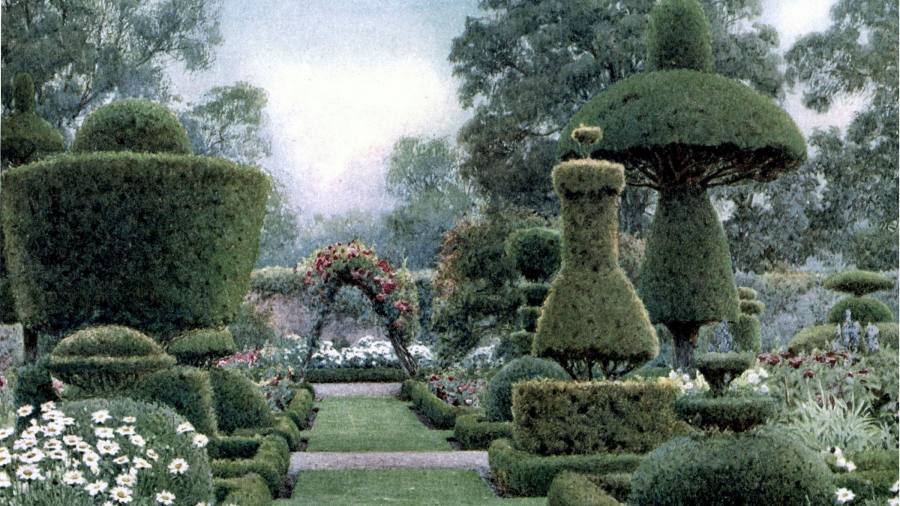 Landscape architect Todd Longstaffe-Gowan’s new book is, as befits his subject, a glorious cabinet of curiosities. Covering a wide selection of idiosyncratic gardeners and their equally singular gardens, it spans from the early 17th to the early 20th century, taking into account many more bizarre features of the English landscaping tradition.

Longstaffe-Gowan eschews too many definitions, preferring a rambling profusion of strangeness and incongruity. The precise nature of the eccentricity proves impossible to pin down – he describes it as “playful budding madness”, which doesn’t sound like much fun – but the gardens included here demonstrate a stubborn dedication to whimsical flights of fancy. Among the many delights are hermits, goldfish, druids and gnomes.

The first subject of the book is Thomas Bushell, a 17th century mining engineer who created an extravagant underground water garden on his estate in Enstone, Oxfordshire. Contemporary accounts and plans reveal a fantasy of artifices built into the rocks, combining the taste for historical landscaping and the latest hydraulic technologies. Bushell’s garden also contained an Egyptian mummy given to him by Queen Henrietta Maria, wife of King Charles I, as well as an early example of an ornamental hermit.

If there is a dominant theme, it is that in the gardens we find reflections of human desire

The fashion for hermits peaked in the late 18th century, when they became particularly associated with the “Picturesque” aesthetic popular in garden design, with its carefully planned asymmetry and taste for solitary figures that valued perspective. In the mid-1700s, Sir Rowland Hill of Hawkstone Park in Shropshire, had a mechanical hermit in a purpose-built cave, of which one visitor remarked, “When you ask him questions his lips move and he responds hoarsely, coughing as if almost exhausted.

There are recurring themes in English garden eccentrics — a taste for miniaturism, for example. The 19th century passion for rock gardens saw alpine grandeur squeeze into much smaller spaces. In 1838, Elizabeth Broughton of Hoole House in Cheshire made a glacier bonsai, a model for the Mer de Glace, near Chamonix, using shrubs to represent trees and ground white spars to look like snow. Sixty years later, Sir Frank Crisp of Friar’s Park, near Henley, erected a mini-Matterhorn made from thousands of tons of York gritstone. At night, electric lights illuminate Crisp’s theme park with animal models, caves, and faux lakes.

The book also covers topiary, in all its weirdness – and among the many delights of the illustrations are engravings of London churchyard yews once cut into fantastical patterns. However, the fashion for forcing nature into unnatural forms was not always popular: Alexander Pope believed it to be an indication of “common taste”. Victorian naturalist Charles Waterton, went the other way, preferring what we would now call controlled rewilding on his Yorkshire estate, building ivy-covered towers for owls and turning his lake into a wild bird sanctuary.

Most of Longstaffe-Gowan’s gardens are large enough to support a crazy vision – and its eccentrics quite wealthy. But small projects are also intriguing. In the 1760s, for example, the great antiquarian William Stukeley managed to fit into his modest country retreat in Kentish Town a grotto, hermitage, Druid walk and mausoleum.

English garden eccentrics is a compilation of pleasantly singular case studies, but if there is one overarching theme, it is that in gardens we find reflections of human desire. They are, as Longstaffe-Gowan says, autobiographies of their owners. Perhaps the examples he highlights also represent an ineffable sense of loss – of localism, folklore and myth – produced by an age of science. When in 1847 Sir Charles Isham filled the stone caverns of his estate with terracotta gnomes and elven blacksmiths, he was not only making a fairytale theme park, he was trying, in his own way, to stem the tide of modernity.

NFTreeTokens is committed to making the NFT industry a greener space