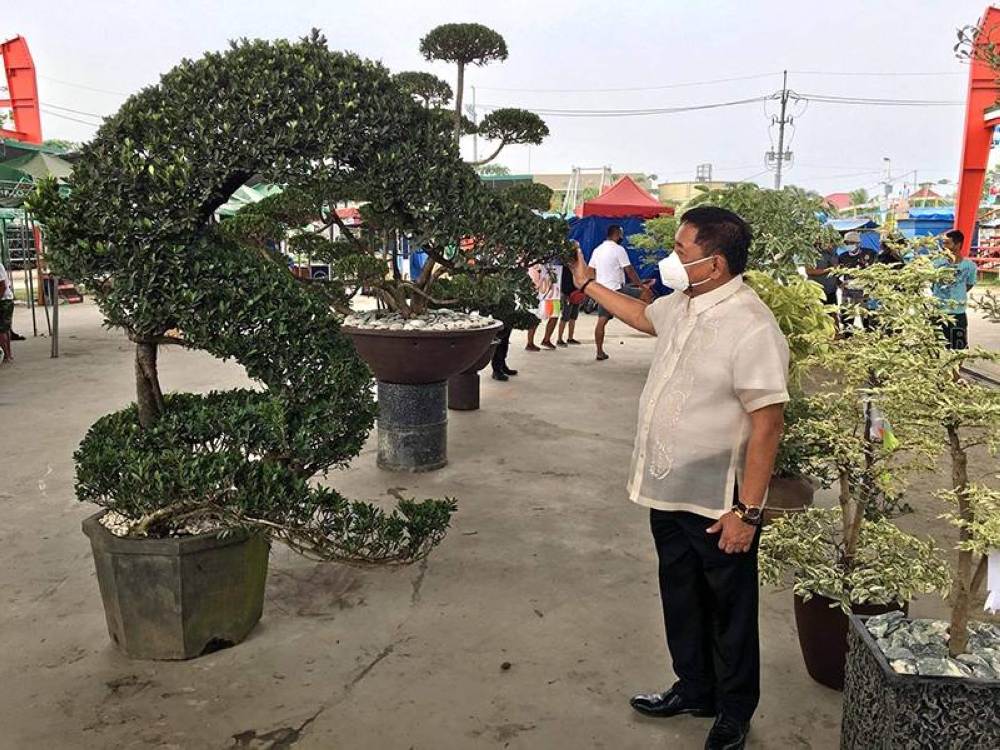 PRIDE OF GUIGUINTO Mayor of Guiguinto, Ambrosio Cruz Jr., looks at a sculpted plant entry during the garden competition at the opening of the 24th Halamanan Festival at the Guiguinto Municipal Arena Thursday, January 20, 2022. PHOTO BY FREDERICK SILVERIO

THE municipal government of Guiguinto, Bulacan, organized the 24th Halamanan Festival in a simple celebration amid the Covid-19 pandemic.

The three-day festival began with the gardening competition held at the municipal bullring of Guiguinto where some 50 gardeners from the said city entered the annual competition such as landscaping (topiary and figured plants), bonsai (cacti and succulents) and ornamental plants (on -the manufacture of garden dishes on site).

The winners were JunJun Sison for the Ornamental Plants category, Alvin Tobias for the Small Topiary/Figurines category, Cesar Androin for the Bonsai category, Clarissa San Lorenzo for the Cactus and Succulents category, Ronnie Domasig for the Onsite Food Garden. Manufacturing competition and Luz Moroña for the Landscaper event.

The champions received a trophy and a cash award from the local government unit.

Cruz said the festival, which was first held in 1999, is now a crowd-drawing attraction, similar to Panagbenga festival in Baguio, Sinulog festival in Cebu, Dinagyang festival in Iloilo and other festivals. of the Philippine Islands.

Cruz said this year’s celebration is different from the previous event as they suspended some activities such as “Indakan Sa Kalye” and “Parada ng Karosa” due to the pandemic.

He said the festival showcases the city’s main industry – ornamental garden plants and the landscaping industry.

“Our garden and landscape industry is now recognized not only in many parts of the country, but also in other countries. We want to showcase the craftsmanship of our skilled gardeners and landscapers at the annual Halamanan Festival which kicks off the feast day of our patron Saint San Ildefonso, the saint of farmers,” Cruz said.

The 3-day celebration will culminate on January 22 where select activities and competitions will take place virtually.

“The Halamanan festival has come a long way and has now become one of the crowd-drawing attractions in Bulacan and is expected to be in full bloom next year,” Cruz added.