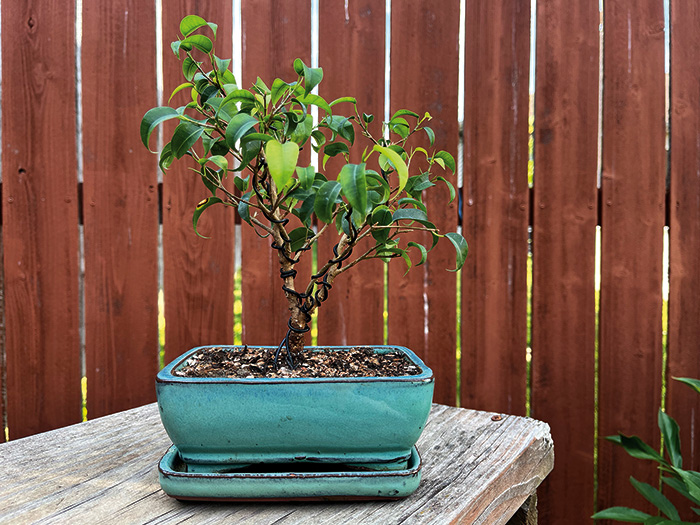 It’s been on the air for a decade now, but I’ve yet to find a show I like or enjoy more than “Chuck,” an action-comedy that tells the story of a computer geek who accidentally downloads virtually every government secret into his brain and is part of a team of spies.
One of the main characters is a stereotypical military-hardened former NSA agent who only loves his crown Victoria, President Ronald Reagan, and a bonsai tree he takes great care of.
The show’s fifth and final season aired in 2012—boy, did the world seem simpler back then—but my bonsai plot stuck.
Last Christmas, and to my delight, my sister surprised me with a bonsai tree of my own.
Its species is “Ficus Too Little,” and while it’s not necessarily compatible with the climate here in Michigan—it’s happiest in 90 degrees and lots of sun—its durability makes it one of the best bonsai options. for beginners.
The learning curve was both interesting and a little steep, finding the right amount of light and water, as well as cutting and wiring the branches to form the desired design. My specific bonsai happens to be a twin trunk, where two trunks emerge from the same roots and split at the base of the tree. As such, I train one trunk to emerge taller than the other, creating a “mother and daughter” style.
When it comes time to replant the bonsai in a few years, I’ll have to decide if I want it to stay as small as it is now or grow about a foot, which is determined by the size of the pot.
Some of the wild tricks I’ve learned so far? If a branch splits or breaks and you catch it during the day, you can literally use Gorilla Glue to fuse it together and it will live on. Additionally, you can ward off a bug infestation by spraying it with a concoction of two tablespoons of dish soap (no antibacterials or bleach), one tablespoon of cooking oil, and a decent amount of water.
For anyone looking to get into the art of bonsai, I would highly recommend Telly’s Greenhouse and Garden Center in Troy. The center employs two bonsai specialists and offers a Saturday bonsai workshop where participants plant and wire their own bonsai for $45.
I particularly like how the center’s offerings include a ‘hospital’ where sick and dying bonsai can be treated by specialists and a ‘hotel’ where you can ensure that your bonsai will be in safe hands during your vacation.
As evidenced by the bonsai trees you find in botanical gardens, marked with ages of up to hundreds of years, a bonsai tree can be a lifetime commitment.
Looking forward to more great 70ish years with my little guy.

To celebrate Olympus, the pinnacle of Battle Royale maps