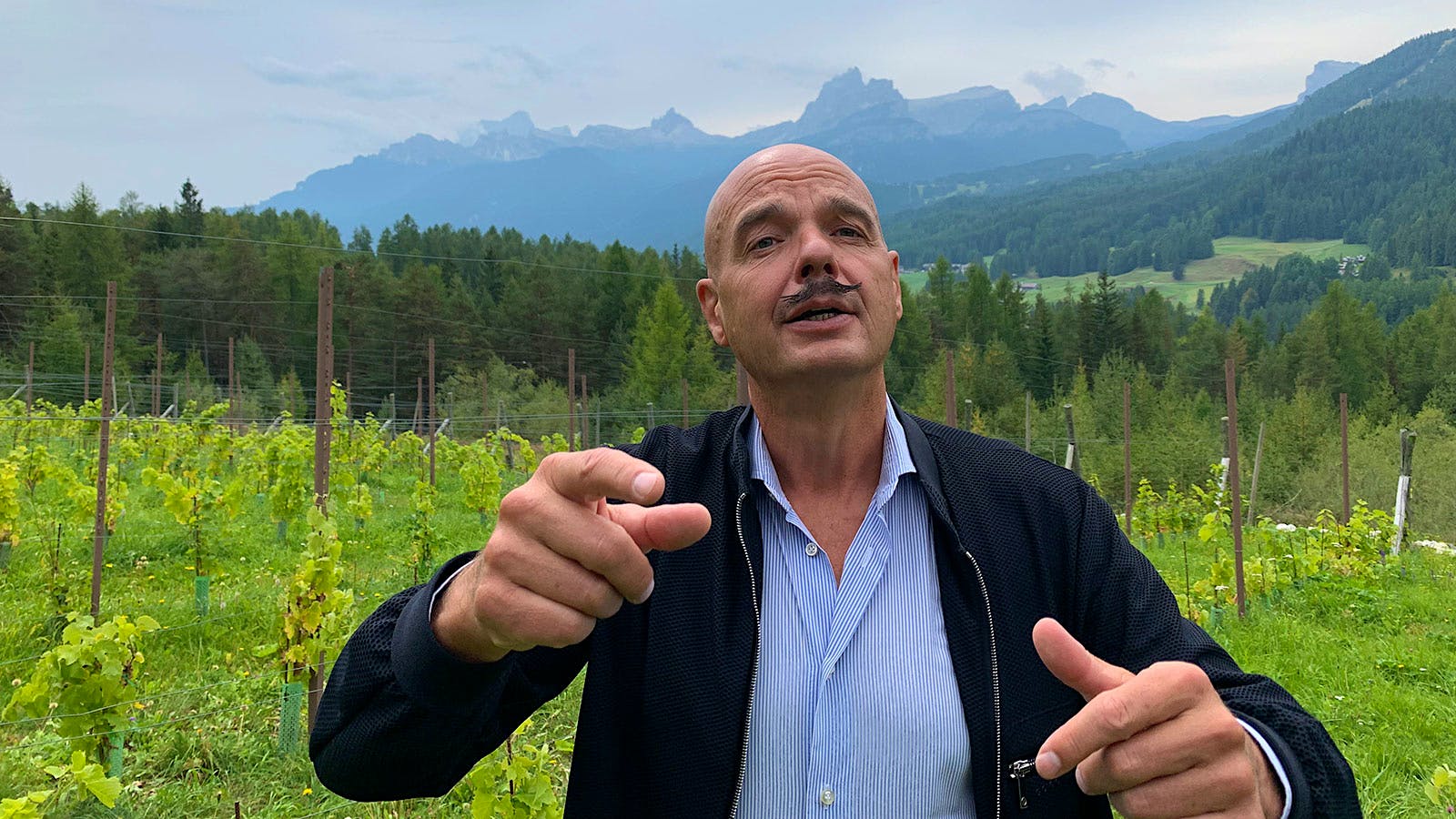 Is it too cool? Bisol tests the limits of the highest vineyard in Europe

Gianluca Bisol developed a taste for exotic wines near his home in Italy’s Veneto region.

After making his fortune in the Prosecco boom with his family’s historic winery in Valdobbiadene, Bisol has taken on offbeat side projects with wine companies in places few (if any) others dare to go.

Fifteen years ago he started his small estate of Venissa on the Venetian island of Mazzorbo, a few centimeters above the level of the capricious lagoon. There, he propagated cuttings of Dorona, a heritage white grape, in a former fortified convent; a small wine resort and gourmet restaurant followed.

Seven years ago. he invests in the development of the Maeli estate with Elisa Dilavanzo, the former beauty queen turned winemaker, in the Euganean hills between Venice and the Dolomites. There, she focuses on making wines from rare yellow muscat.

Around the same time, he embarked on his most recent and extreme project: cultivating the highest vineyard in Europe, in the posh Dolomite ski resort of Cortina d’Ampezzo, about 100 miles north of Venice. At just three-quarters of an acre, the Vigna Major site is nestled at an elevation of 4,429 feet.

“I love niche wine production and I love Veneto,” says Bisol, now 55, as we walk along a dirt mountain path to Vigna Major. The vineyard, usually buried in snow most of the winter, is about 650 feet higher than Switzerland’s Visperterminen wine region, although Vigna Major has yet to start producing.

“In the same region, I will have the lowest vineyard in the world and the highest on the continent,” confides Bisol, the image of relaxed elegance with his jeans and his handlebar mustache.

In winter, the cold-resistant Incrocio Manzoni Bianco and Solaris vines and the bonsai trees of Vigna Major are safely covered with snow. (Courtesy of Gianluca Bisol)

Four years ago, he and his brother completed the sale of the nearly century-old Desiderio Bisol & Figli to Gruppo Lunelli, owner of sparkling wine producer Ferrari in Trento. He keeps his day job as president of Bisol while moonlighting as a boutique winemaker.

I’ve known and written about Bisol for years and found him to be a proud Venetian with an eye for beauty, money to invest and a knack for mixing. land with a luxury image.

Accordingly, he did not choose just any marshy plains for Venissa, he chose Venice. He didn’t choose any old mountain to make high altitude wine, but chose Cortina, which hosted the 1956 Olympics and will be a location again in 2026. Both towns have served as settings in James’s films. Jump.

So before going to Vigna Major, I thought about the idea rang costs. But, I was wondering, is this project right very cool– both in its rarefied exclusivity and, literally, in the climate? In other words, is Vigna Major just too far and up there?

A bit of history: The project began as an experiment by Cortina-born winemaker Fabrizio Zardini and Francesco Anaclerio, research director of a major international incubator based in Friuli.

In 2011, the men planted seven varieties in a clearing in the great forests of Cortina belonging collectively to the Regole d’Ampezzo, an association of descendants of the town’s founders.

On February 1, almost half of the vines were wiped out by freezing temperatures that lasted more than 10 days. The following year, more vines were lost to hail.

When Bisol met Zardini by chance at an event in Cortina in 2013, Zardini told him: “We cannot continue without investment.

Bisol agreed to buy out the project and keep the men on as consultants. Over the next few years, they studied the evolution of the vineyard and, in 2018, re-grafted it with what they found to be the two most cold-resistant grape varieties: Incrocio Manzoni Bianco, created in Veneto by crossing Riesling and Pinot Bianco, and early-ripening Solaris, bred in Germany in the 1970s and planted in early vineyards in England and French Normandy.

Today, Vigna Major is no ordinary vineyard. I visited in September, a few weeks before a small harvest was trucked to Maeli, where it was expected to produce enough wine for up to 50 bottles for friends and associates on Bisol’s gift list.

The vines – 1,380 in total – look stunted and bonsai-like, rarely climbing to waist height, with tiny green berries in small clusters. They seem even smaller against the spectacularly vast landscape dominated by Tofane, Cortina’s famous group of mountain peaks.

All of this begs the question: Are these vines happy here?

Given the extreme conditions, says Bisol, “We expect to be able to make wine in seven out of 10 vintages.” In 2022, he hopes to make 700 bottles of a wine that will be released under the name of Vigna Major.

“In years when there is good acidity, we will make a sparkling Champagne method”, he specifies. “If the summer is hot, we will make white [still] wine.”

So what is the indicate this side ?

“The point is to demonstrate that nature is very different at this altitude,” says Bisol, elaborating on the high solar radiation here, which helps kill mold and mildew. “In all parts of Europe, people are looking for higher vineyards [in response to] climate change.”

Let’s be real here. With less than 60 cases manufactured, what exactly will Vigna Major be? Wine or collector’s item? When Bisol told me the expected price was over $500 a bottle, the issue for me was settled. It’s a rare band that’s going to spend that kind of money.

Still, I’m intrigued by the type of wine it will produce.

“Wine from here will have a peak alcohol content of 11.5 to 11.7 percent,” says Bisol. “It will be a different experience.”

Bisol is about creating different experiences. It does not stop at Cortina. He continues to keep an eye out for Veneto, including the wine-packed hills of Valpolicella, for more different experiences he could create. With characteristic aplomb, he says he’s in no hurry.

“In life,” he says, standing amid the Vigna Major vineyards as ominous clouds gather over nearby peaks, “beautiful things just happen.”