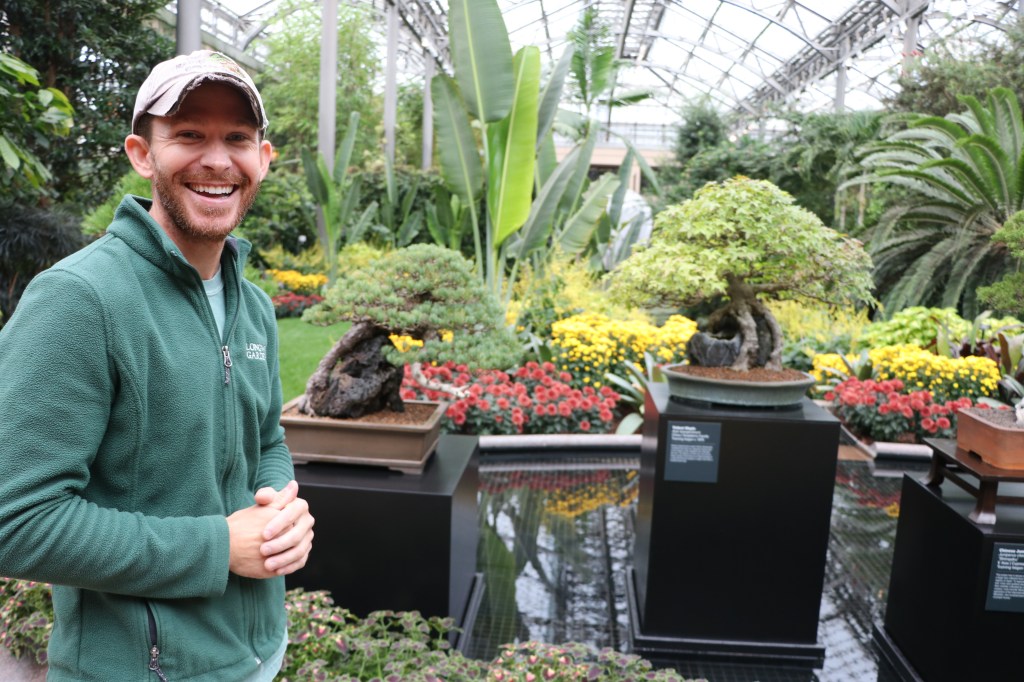 EAST MARLBOROUGH – Seven trees from the Kennett Collection are now on display at Longwood Gardens thanks to a recent charitable donation from a Kennett man.

“I am delighted to donate specimens from the Kennett collection to Longwood,” said Doug Paul. “I have spent many happy years managing these bonsai trees and sharing them with other bonsai connoisseurs at the Kokufu Show – the Westminster Dog Show of the Bonsai World. I now look forward to an audience wider can enjoy their beauty and splendor in Longwood.

The Kennett Collection, located in Chester County, is considered the finest and largest private collection of bonsai trees and bonsai-related objects outside of Asia. This collection has continued to grow every year for over two decades, with masters from around the world still at work on the special trees found there.

Received in two parts, Paul’s initial donation to Longwood will include 50 bonsai donated over the next two years, as well as an annual cash donation to support their upkeep.

“These significant bonsai trees, which have been carefully and thoughtfully trained, will make Longwood’s collection one of the most important in the country,” said Paul Redman, President and CEO of Longwood Gardens.

“The first 50 specimens will expand the breadth and depth of our existing collection of 78 bonsai trees, best known for the diversity of our flowering species and for four remarkable trees developed by artist Yuri Yoshimura,” said Redman. “We are extremely grateful to Doug Paul for this transformative gift and the faith he shows in our bonsai program by entrusting us with these important living works of art.”

Paul has imported, maintained and improved specimens from Japan of the highest quality in America, according to Peter Warren, the UK’s foremost bonsai professional.

Once the Kennett Collection trees are located in Longwood, it will undoubtedly be one of the top three collections in the United States, he added.

“All of the trees in the collection have a unique and prestigious place in bonsai history, spanning many generations,” Warren said.

Kevin Bielicki discussed the art of bonsai on Thursday morning at Longwood Gardens with the Daily Local News. Before joining Longwood Gardens as a bonsai curator five years ago, he gained 12 years of experience in the art of bonsai working on the Kennett collection, where he also had the opportunity to learn from the masters visiting the priceless works of Chester County. world.

A lifelong lover of art and design, Bielickin said he has always been inspired by art and design. He rooted his initial passion for bonsai when he first saw a blooming crape myrtle with flowers at the Kennett Collection.

“We don’t just receive a donation from him, we have full access to all the trees in his collection,” Bielicki said of Paul and The Kennett Collection. “So that’s something that’s very unique to our institution.”

The art of nature

The seven bonsai trees currently on display at Longwood Conservatory mark the first trees donated under this bequest, which was announced on October 4.

The seven trees include a trident maple – Acer buergerianum – in the root-on-rock style, which was popularized over 100 years ago in the Nagoya region of Japan. Boston-based bonsai artist Suthin Sukosolvisit developed this specimen.

Other trees from the Kennett Collection on display at Longwood Conservatory until November 13 include a Japanese white pine – Pinus parviflora ‘Miyajima’ – which was designed by renowned bonsai artist Kimura Masahikol a Japanese black pine – Pinus thunbergii – considered as one of the most important species in Japan and originally formed under the care of Suzuki Shinji; and a Satsuki hybrid azalea – Rhododendron ‘kinsai’ – of the kinsai variety, which is known for the resemblance of its flowers to a firecracker – a distinctive red flower with acorns, as noted earlier. This superb specimen comes from the garden of Kunio Kobayashi, who founded the Shunkaen Bonsai Museum in Japan.

“The second part of the gift is a bequest, which will provide an additional 100 specimens – including bonsai kicho or bonsai masterpieces that are important because of their beauty or rarity – and $1 million for an endowment for ongoing maintenance of the collection, as well as other acquisitions,” said Patricia Evans, public relations manager for Longwood Gardens. “The bequest will more than double the size of Longwood’s collection. Most importantly, it will add significant examples of rare Japanese tree species, making Longwood the premier collection of Japanese-trained bonsai trees on public view in the United States.

Part of Longwood Reimagined’s $250 million revitalization and construction project, currently underway, is the creation of a new Bonsai Courtyard.

These bonsai trees will be the focal point of this exhibit, Evans said.

The Longwood Reimagined project affects 17 acres of the 1,077 acres and is expected to be completed by fall 2024.

Longwood Reimagined: A New Garden Experience covers the renewal and improvement of the Waterlily Court, the establishment of a new outdoor Bonsai courtyard, the relocation, reconstruction and preservation of the Cascade Garden, and the creation of a new home 32,000 square foot glass West Conservatory in the heart of the end of the rainbow.

Part of the initial transformation phase has already been completed with the expansion of the Orchid House, now visible to the public. The Orchid House is home to hundreds of orchids now under a new glass roof with upgraded display cases, spacious seating, and beautiful views of the property’s majestic main fountains.

The gift is one of the most comprehensive and generous that Longwood has received as part of the Pierre S. and Alice du Pont Gardens Founders’ Circle, which recognizes and honors people who make the thoughtful decision to include Longwood Gardens in their estate plans, according to a press release about Paul’s charitable donation.

The Longwood Gardens Bonsai collection began in 1959. Over time this collection has evolved into one of the finest bonsai assemblages in the country. Starting with 13 trees purchased from Yoshimura, the collection has now grown to 78 trees with 50 species represented. Longwood’s collection is notable for the significance of its local landscape flora, the press release said. The oldest trees in the collection have been in formation for over 110 years. Nine styles are represented, including straight, informal straight, waterfall, raft, forest, root on rock, broom, tilt, and literate.

Paul started the Kennett collection in 1999. Today the trees now cover 1,200 bonsai specimens from around the world.

“Trees teach you so much about life, time and nature,” Bielicki said. “They are certainly an inspiration.”