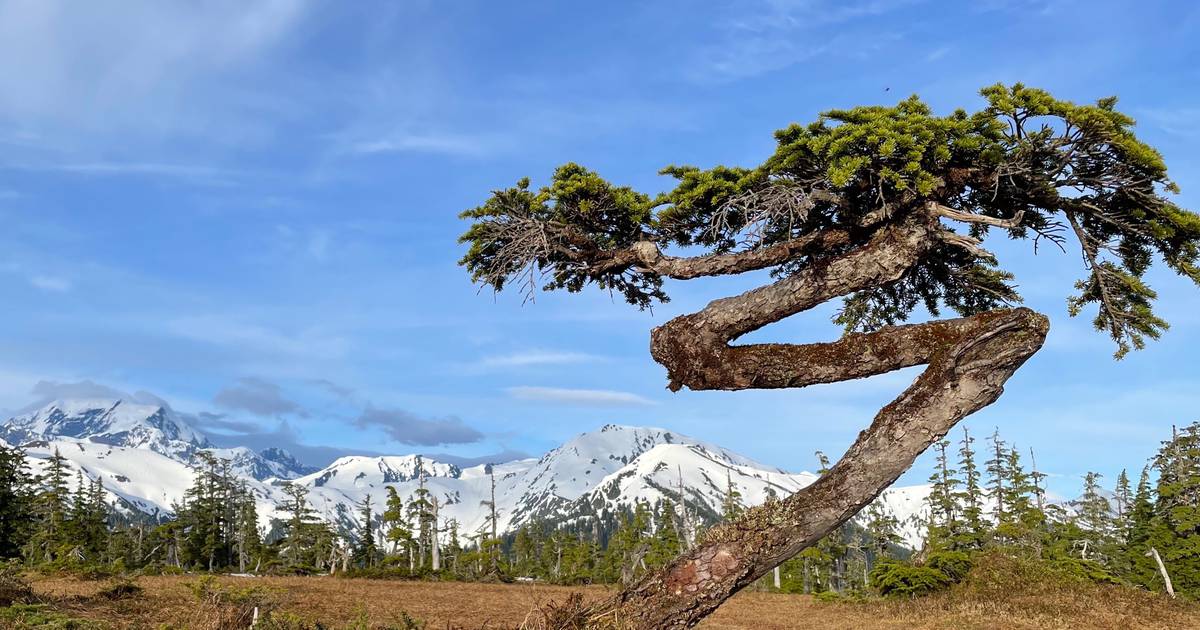 Like messengers from the past, Alaskan bonsai tell tales of harsh winters through their tree rings

A GREEN PLATEAU NORTH OF LITUYA BAY – “These are museum-class bonsai trees,” Ben Gaglioti says as we pass through a forest of elves.

Gaglioti, an ecologist from the University of Alaska at Fairbanks, led me to another landscape I’ve never seen in Alaska. This terrace of spongy soil above the rainforest is home to trees that Dr. Seuss could have imagined.

Winter storms from the Gulf of Alaska have sculpted these hemlocks on the outer coast of Glacier Bay National Park into mountain people waving to you, the letter Z, and umbrellas.

Gaglioti sees damaged trees as messengers from the past, carrying memories of harsh winters in their gnarled stems.

Here, about 10 miles north of Lituya Bay, it’s cool enough to be chilly here even on this summer’s day. The exhibition makes it easy to imagine winter storms.

“There’s no stopping the winds between here and Hawaii,” Gaglioti says, pointing to the blue-green expanse of ocean that ends in a line that seems to knock you down if you pass it.

How are these trees useful to a scientist? Gaglioti noticed that these hemlocks developed a dark, resin-rich ring during the summer after a winter storm gnawed them away. Most tree-ring records don’t take into account what happens in winter, when trees are dormant.

Standing on some 1,800-foot terraces here in the rugged wilderness are twisted indicators of what has happened in the North Pacific off Alaska during the winter for the past four centuries. Gaglioti found it by taking tree cores.

Today, he screws an increment driller into trees with an action akin to changing a tire. The board resounds with “tock, knock, knock”, as he backs the corer out of the tree.

He twists a cylinder of wood thinner than a pencil. It smells of the wood yard.

Gaglioti has seen years when a quarter or more of the trees showed the dark ring indicating a harsh winter.

With over 300 of these cores, he was able to reenact the harsh winters dating back to around 1786, when Commander La Pérouse declared the nearby bay of Lituya the port of France – before losing 21 men at the dangerous entrance to the bay and sailed away.

The trees told him that giant weather systems like the Aleutian Low appear to have persisted despite human-caused warming.

During winters when the Aleutian Low is strong, warmer temperatures and southerly winds create icy, stormy conditions that increase the likelihood of tree damage.

On a larger scale, the Aleutian Low swirling above this giant body of water is causing droughts, floods and wildfires across western North America. Scientists have also linked the cycles of the Aleutian Low – which shifts from strong to weak every few decades – to the extent of Arctic sea ice and the strength or weakness of salmon flows along the Pacific coast. , from California to Alaska.

After gathering 20 carrots and storing them in paper straws, Gaglioti seals them in a plastic bag. They will add to the load he will be carrying in his backpack out of here. One day, probably in the dark of winter, he will look at them under magnification and see what these trees have to say about the hard times they have endured.