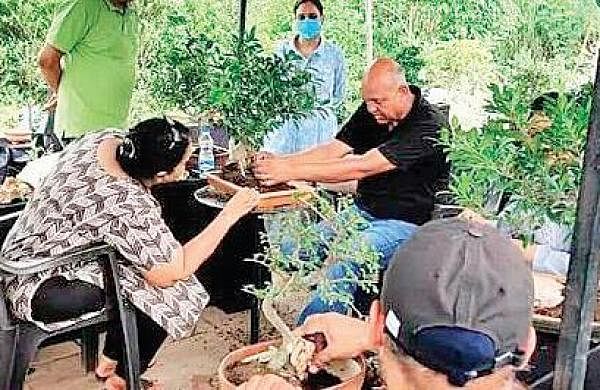 An art believed to have originated in 7th century China, growing miniature plants in pots was once considered a status symbol among the elite. It was not until the 10th century, after China established diplomatic relations with Japan, that this gardening technique was introduced to the Japanese population. Now recognized as bonsai (the Japanese term literally translates to “planted in a container”), it has traveled the world. In fact, these creations are often seen as symbols of patience, balance, and even luck for many.

Vaishali resident Saumik Das found joy in the art of bonsai at a young age. “When I was at school, I regularly visited flower shows. The bonsai looked exactly like trees, but these were in pots. It fascinated me a lot. So I tried to learn more about the techniques and steps to create it on my own,” shares Das, who has received accolades at various flower shows.

Although his Grow Green Bonsai farm at Sector 128, Noida was established as a hobby, it has now become a nursery and learning center for bonsai artists. A number of bonsai enthusiasts from Delhi-NCR join Das – Delhi Tourism holds an annual personal exhibition to recognize his work – here to learn the technique of plant miniaturization. The artist, an ambassador for the South Asian Bonsai Federation which represents India in the art of bonsai, also leads three bonsai art courses at the Noida Horticulture Society as well as other horticulture clubs in different cities.

“There are different techniques for growing a bonsai. By trimming them and wire them, you can give them any shape you want. It is endless art, living beauty that grows and changes every day. It’s a slow process but develops patience and the end result is beautiful,” says Das.

Through his years of understanding trees and techniques, he also introduced the art of Penjing (pot decors and landscapes in Chinese) to India. “The climate in Delhi is not suitable for many plants. So based on that, I have to be careful in selecting the species I work with to make sure they survive,” Das mentions.

Although he has taken online classes (he plans to host a workshop in mid-December), Das says that to create bonsai trees, participants must have a working knowledge of plants. Speaking of the importance of this art, he concludes: “I believe that everyone should adopt this practice. The bonsai is not only a beautiful installation for the house, but as a tree it also provides oxygen.

Like small manicured lands, making terrariums at home is beautiful and good for the mind