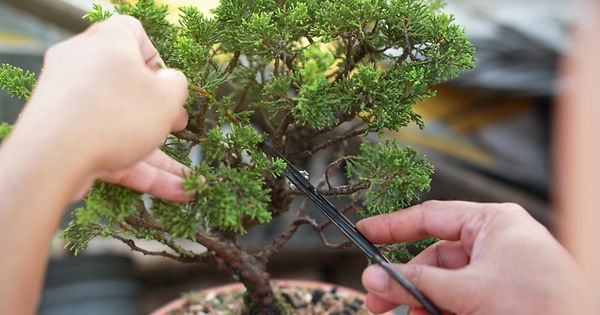 “Bonsai trees aren’t that hard to grow, if someone has a bit of talent to keep a plant alive”

“Bonsai trees aren’t that hard to grow, if someone has a bit of talent to keep a plant alive”

Bonsai is any woody plant, tree or shrub planted in a bonsai pot that meets a number of criteria, says Tom Bendels

The name bonsai evokes miniature trees, Zen gardens and Japan. But Luxembourg has its own share of bonsai thanks to the Bonsai Enthusiasts Group.

The Minett-Differdange Bonsai Association was founded in 1992 and currently has around fifty members, of which a core group of around 20 meets every month. Members range from enthusiasts to the curious or even those who don’t have bonsai trees.

“Bonsai trees aren’t that hard to grow, if someone has a little talent for keeping a plant alive,” says member Tom Bendels.

Last year, the association organized its annual bonsai exhibition in the Grand Duchy, in collaboration with other groups from Germany and France. The exhibitions offer the possibility to see different specimens, to discuss with specialists and, in the case of Luxembourg bonsai members, to win a number of prizes for their exhibitions.

But it’s not all about contests or prizes. They also organize cultural trips to places inside and outside Europe to deepen their knowledge and appreciation of bonsai.

A highlight of the group’s social calendar is the annual meeting yamadori – a term used to describe the practice of collecting wild trees growing in their natural habitat and planting them in containers to grow as bonsai. This requires working closely with local landowners and municipalities to obtain the necessary permits to responsibly remove young trees from their land.

Today, bonsai is inextricably linked to Japan and Japanese culture, but its origins are firmly rooted in China. The practice stems from the Chinese art called penjing Where penzai where tiny intricate landscapes are formed using cultivated trees and other plants to create the world in miniature.

Japanese visitors to China returned home with souvenirs that included so-called container gardens. Beginning in the 6th century, these otherworldly landscapes managed to capture the imagination of the Japanese, eventually being adapted and adopted into their culture as bonsai trees.

Contrary to popular belief, bonsai trees are not a specific plant species.

“Bonsai trees are basically any woody plant, tree or shrub that is planted in a bonsai pot and meets a number of criteria to be a ‘true’ bonsai tree,” Bendels explains. According to these criteria, the main branches and the canopy play a role in the design and their size, size and potting contribute more to their style.

A constant requirement of any plant is the need to water, feed or prune it, but Bendels says it’s a great way to relax and get out of the “fast lane” of life. Bonsai trees are the perfect antidote to the stresses and strains of modern life. An opportunity to regain control and master the forces of nature – if only momentarily – through the careful creation of miniature, zen individual spaces.

Although it discourages a trip to the local garden center for such a specimen. We are lucky with the range of trees and shrubs available in the Luxembourg region. But, this begs the question, is there one that makes the perfect local bonsai? Although it’s hard to choose a favorite native plant, Bendels says “locally growing blackthorn and hawthorn make very good bonsai trees – they have small leaves, interesting bark, small fruits and beautiful flowers in the spring”.

Whichever type of specimen you choose for bonsai, the most important relationship you will cultivate on your journey is not between your plant and yourself but between your sempai (upper) and kōhai (junior). If you want to master the art of bonsai, it’s important to build a good relationship with your mentors and take advantage of their experience and help, Bendels says.

The art of bonsai should not be confused with niwaki. niwaki literally translates to garden tree, meaning trees or shrubs that have been planted directly in a garden and not grown in a specific bonsai pot.

What makes bonsai so special? “The best thing about bonsai is having a totally different view of nature and maybe life as well,” Bendels says. And it deserves to be cultivated.

Want to improve your Japanese experience?

Practice the art of bonsai with authentic Japanese tea at Mizu. Luxembourg’s Japanese Tea Shop can provide you with everything you need, including tea, online.

Prepare a bowl of Ramen after a Zen gardening session. Manzoku offers fresh Ramen on site or to take away.