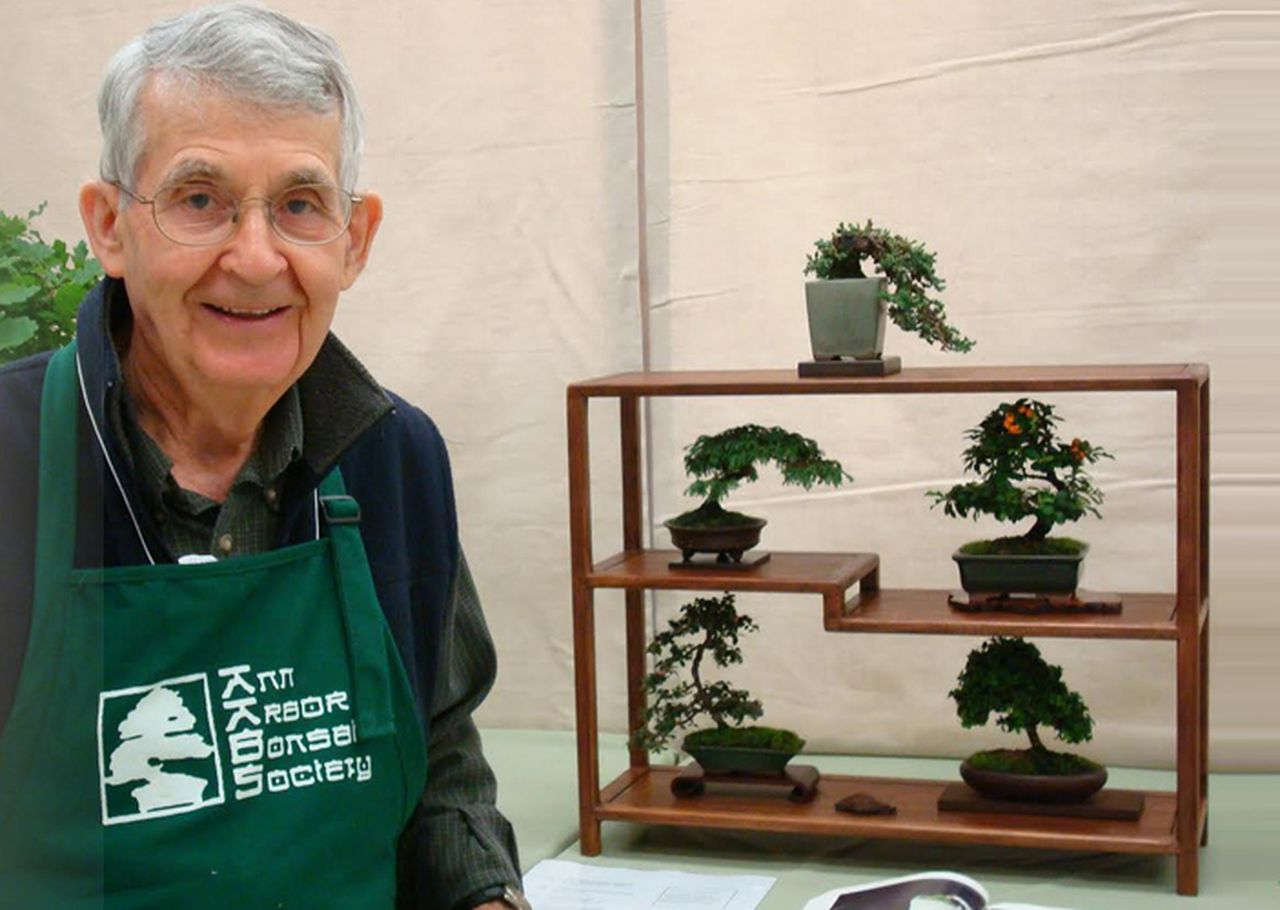 Originally from a small farm in Hillsdale County, he earned a degree in biology from Michigan State University at the height of the Korean War. With a degree in hand, the Army sent Wikle to Japan for duty.

His early interactions with traditional Japanese trees piqued his interest, particularly the way bonsai enthusiasts manicured and cut the leaves as if they were “living sculptures,” Wikle said. This interest turned into a passion for bonsai as an art form.

Wikle, who approaches his 90th birthday in July, has shared that passion with the people of southeast Michigan for more than five decades as curator of the Bonsai collection at Hidden Lake Gardens in Tipton.

The garden, owned and operated by his alma mater MSU, hired Wikle 54 years ago as its first education specialist. His retirement party on July 9 will also serve as an auction event for the garden to raise funds to safeguard the future of his bonsai vision.

“The first bonsai exhibit at Hidden Lake started in 1968 with some of my personal trees,” he said. “What exists today has all evolved from that.”

The in-person and virtual auction will take place from 11 a.m. to 3 p.m. at the garden location at 6214 Monroe Road off M-50. All proceeds will go to a legacy fund to maintain its collection, said Paul Pfeifer, general manager of Hidden Lake Gardens.

“It’s really going to help us develop a fund that will then be available to keep fundraising solvent,” he said, “whether we need to help pay another curator’s salaries, hire a intern student, to purchase new trees, to conduct any type of maintenance or to expand the collection in any way.

More details about the auction or Hidden Lake Gardens support can be found at jackwiklebonsailegacy.com.

For Wikle, he first felt he couldn’t work on bonsai because he was not Japanese. Later he found a bonsai garden in Grand Ledge curated by a man named Bob Maxon and realized that could be an activity for him as well.

“What he was doing was exciting for me and it made a positive impression on me,” Wikle said. “I decided that if I had a chance, I would like to try to do it.”

The process of creating art through bonsai is a meditative process, Wikle said, adding that the discipline needed to create a work of art honors Japanese culture.

“What we aspire to do is an artistic statement about nature and trees and the beauty of it all and to go further and become more and more aware of the beauty of the close interaction between people and nature”, did he declare.

“Many descriptors come to mind about Jack: bonsai artist, teacher, nature lover, philosopher are just a few,” she said. “Spending a few minutes with Jack at the Bonsai Collection is about appreciating his passion for bonsai, enjoying his humor and sharing a cultural experience you didn’t really expect.”

His collection at Hidden Lakes Garden now consists of trees ranging in age from 20 to over 100 years old. Some of them are native to Japan, while some native Michigan trees, such as beech and tamarack, are tended in the traditional bonsai style.

Wikle makes the exhibit accessible to visitors to the garden with her “outgoing and caring attitude,” Pfeifer said.

“He’ll talk to anyone,” Pfeifer said. “He will demonstrate bonsai to anyone and he will listen to anyone. If you’re into plants or nature, he’s all ears and loves spending time with people.

With retirement only a few weeks away, Wikle’s love for bonsai will continue. He still plans to volunteer at Hidden Lake Gardens and is the longest serving member of the Ann Arbor Bonsai Society.

With the fundraising auction, he just hopes that Hidden Lakes can find someone who will work hard to keep the bonsai collection alive.

“We’re trying to make sure it continues at a quality level long after I’m gone,” he said.

This Michigan Surgeon Has Climbed the Tallest Mountain on Every Continent

Looking to add some zen to your landscape? Visit these Japanese gardens for inspiration | News