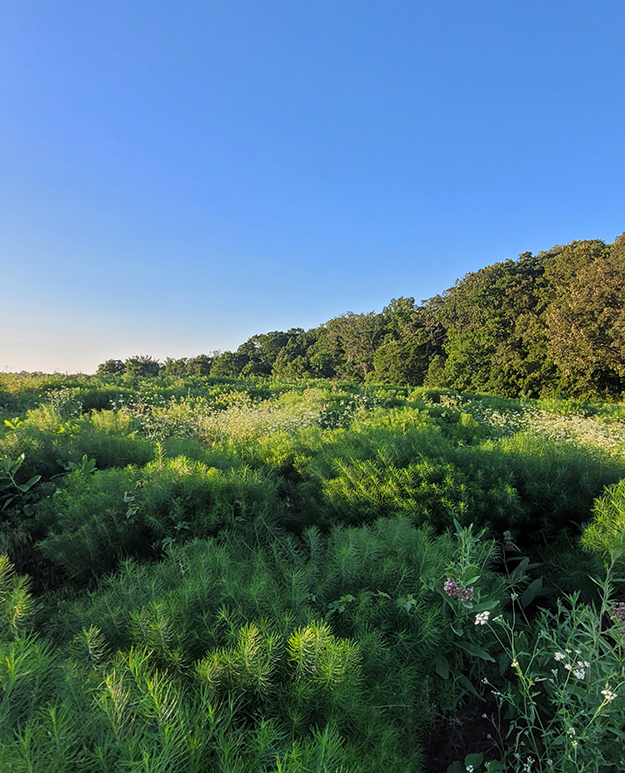 Somehow the United States National Arboretum in Washington, DC remains under the radar despite attracting more than 700,000 visitors a year. Far to the east of the city, it is not accessible by metro and can seem dangerous by bike or on foot. But a recent master plan developed by a landscape architecture firm Reed Hilderbrand promises to make the 451-acre treasury, which includes over 29,000 plants of scientific value, a more accessible and valued place.

The only part of the US Agriculture Research Service’s 94 research stations open to the public, the US National Arboretum was established by an act of Congress in 1927 and opened to the public in 1959. In 1928, President Calvin Coolidge signed legislation affecting $300,000 to buy land, including Mount Hamilton, the site’s 230-foot peak. Additional land purchases made in the 1930s and 1940s brought the research facility to its current size. The Arboretum now borders the diverse and gentrified communities of Gateway, Ivy City and Carver/Langston.

In 2019, Reed Hilderbrand completed work on their new master plan, which has obtained the approval of the Commission des Beaux-Arts (CFA). The plan was funded by the Friends of the National Arboretumwhich is currently fundraising to implement some aspects of the plan as well as a new National Bonsai and Penjing Museum for which Reed Hilderbrand also created design concepts.

During a visit to the arboretum as part of The Cultural Landscape Foundation (TCLF)is free What’s Out There Public ToursDoug Reed, FASLA, founding director of Reed Hilderbrand, and Richard T. Olsen, Ph.D, director of the arboretum, intertwined stories about the research center’s design and scientific legacy with hopeful visions for his future.

Over a glass of white wine at the Visitor Center, Olsen set the scene, explaining how the arboretum has played an important role in the history of landscape architecture and scientific research into the plant world.

View of the garden where the landscape architecture agency Oehme of Sweden Reportedly invented the New American Garden style, which features artful layers of native plants, in the 1980s, Olsen said “this idea of ​​focusing on American perennials in garden design” hadn’t existed before. .

Another newer garden adjacent to the visitor center of landscape architects Claudia West, Intl. ASLA, and Thomas Rainer, ASLA, co-founders of Phytostudio and co-authors of the influential book Planting in a post-wild world, a more advanced contemporary ecological garden design. “Their garden is designed to take care of itself; plants are allowed to move. It’s scientific planting design rooted in ecosystem knowledge,” Olsen said.

Fascinating treats like these are largely lost on DC’s millions of visitors each year because the Arboretum isn’t on their must-see list. “When I take a taxi to the arboretum from Reagan National Airport, I have yet to meet a driver who knows where the arboretum is,” Reed said.

“Our objective with the framework plan is to make the arboretum much better known, to open up the space to the public. There are unique ecological systems but also cultural aspects. It can be a marriage of science, art and nature.

As we boarded the tour cart, Olsen explained how, in 1953, the U.S. Department of Agriculture Agricultural Research Service was formed, and the arboretum became part of this system. In addition to educating visitors about trees, the arboretum is also a center for scientific research that supports the ornamental tree industry. For example, Olsen stated that a “third of all crepe myrtles sold in the United States are or are derived from arboretum introductions”.

The Arboretum is essentially a living museum. The seeds of many trees like oaks and magnolias cannot be stored in drawers or long-term freezers, so the Arboretum must instead keep the tree’s DNA intact in living trees. Visitors can marvel at the collections of boxwood, azaleas, lilacs, dwarf conifers and ferns, as well as rare Asian plants, but they are also scientific specimens.

In their extensive research as part of the planning process, Reed noted that they had found an earlier property map from 1863, which showed the site’s hydrological systems, croplands and orchards. Rural paths through the landscape influenced the roads that were laid out for the arboretum. “There have always been human and ecological footprints on this land,” Reed said.

While the arboretum was included in the McMillan Plan for the District of Columbia, there were no further details. Landscape architect Frederick Law Olmsted, Jr., son of the eldest, was involved in the initial planning. A master plan created in 1948 guided the development of the site, with a further update by Sasaki in 1978, followed by five or more planning efforts over the following decades.

Reed’s team found that the landscape is made up of “wooded hills, meadows, dendritic ravines and agrarian fields”, so restoring the landscape’s original and diverse character would be essential to creating stories and connections. deeper for visitors. The company also wants to reconnect with the Anacostia River, which runs along the east side of the arboretum, past the Asian collections. “We want to evolve the landscape to be clearer and more consistent and to better present the arboretum.

Consistency will also result from the resolution of the many access and circulation problems.

A “70-year-old problem” is that the District of Columbia government failed to follow early 1950s plans and create additional connections in the arboretum just off the Baltimore-Washington Parkway, Olsen explained. “Visitors now come through the back door,” Reed said, by R Street, which runs through a residential community, only after navigating the Baltimore-Washington Parkway, a major thoroughfare.

“It creates a bigger orientation problem,” Reed explained. A key part of the new master plan is to repurpose the entrance to the Baltimore-Washington Parkway, with the idea of ​​capturing more vehicles more easily.

Upon arrival, drivers will be directed to a new, expanded Welcome Center where they will be asked to leave their cars. Additional facilities for pedestrian and cyclist access are also planned.

Reed Hilderbrand’s plan will center administrative and scientific efforts in the heart of the arboretum, expanding visitor service areas and science education experiences, so the story of science can be better told.

At the same time, the plan calls for the reopening of a gate along M Street and Maryland Avenue near Carver Terrace, which was cordoned off in the 1980s due to an explosion in drug crime . “We’re working with the city to reopen that door and provide more equitable access to the surrounding community,” Olsen said. “We will need funding.

At the start of the arboretum, vehicle operators left the Baltimore-Washington Parkway, entered Maryland Avenue, and entered the arboretum through large gates. These gates now appear as relics surrounded by opportunistic plants.

Reed Hilderbrand plans to reduce the parking lot facing the gates and expand the central Ellipse Meadow, the centerpiece of the arboretum, to extend south. “We will turn Ellipse Road into a pedestrian walkway and reconfigure the walkways in this part of campus.” Communities cut off from the park will soon be able to enter and will be greeted by an expanded grassland.

Inside campus, the Arboretum’s current circulatory system is heavily car-centric, with nine miles of paved roads and a number of large parking lots. All of these impervious surfaces mean that a significant portion of the Arboretum’s $14 million annual budget is spent paying stormwater runoff fees to the district government.

So the new plan will remove some roads and make others permeable gravel, turn wide two-way roads into one-way roads and reduce some large parking lots. The goal is to move on to indoor and outdoor circuits.

Drivers will be advised to parallel park along these roads, but there will always be larger car parks for peak seasons, i.e. spring and fall. “In total, there will be 40 fewer acres of parking,” Reed said, which will help the arboretum significantly reduce those stormwater charges.

The tour trolley then stopped at the Asian Collection. The trees in the Japanese collection were collected after World War II; for the Korean collection of the 1950s; and for the Chinese collection in the late 1980s, after the country reopened to Americans. Conceived by landscape architect Perry Wheelerthe collection takes visitors on the trails of the Anacostia River.

Here, Olsen described the tremendous efforts scientists made to collect specimens. A garden features a rare Chinese tree from the Camilia family that made a scientist walk through a hillside latrine in rural China to secure its seeds. Beyond determined exploration and collection efforts like this, arboretum researchers study tree taxonomies, genetics, breeding, and virology.

The visit ended in the heart of the arboretum: the Interior Corinthian columns of the original US Capitol Buildingwho British gardener Russell Page and the landscape architecture firm EDAW laid out atop a hill in the sprawling Ellipse Meadow in the late 1980s.

Experiencing the setting sun in the meadow was an uncommon pleasure considering the usual closing time of the arboretum at 5 p.m. Hopefully, if the new plan for the arboretum is fully realized, more visitors will be able to experience both the splendor of the landscape and the science, and hours will be extended for summer evening reveries.

Support the fundraising efforts of the Friends of the National Arboretum and also check out TCLF’s What’s Out There guide to Washington, DC on line and printed versions.