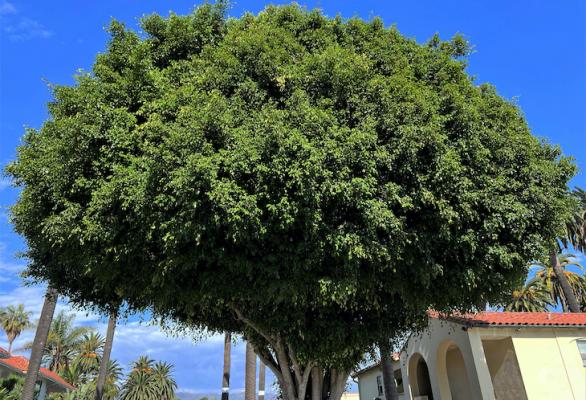 Although known primarily as an elegant indoor foliage plant, in our Mediterranean climate the weeping fig matures into a majestic, medium-sized evergreen landscape tree. Undoubtedly, many weeping figs around town were first grown indoors as houseplants – outgrown their pots and spaces – and later planted outdoors.

In our area, the weeping fig normally reaches 25 to 30 feet in height and bears a rounded dense crown that spreads up to 30 feet in width, providing generous shade. In ideal conditions, it can grow even bigger, so be careful where you plant it!

Limbs and branches grow upright but curve downward at the ends, creating a graceful weeping effect. Although normally a single-trunked tree, it often has lower branches that develop into multiple trunks; subsequently, these can self-graft into a single trunk. Young trees can also be pruned to have a single trunk.

Perhaps the most distinctive feature of the weeping fig is its glossy green leaves. These are oval-elliptical in shape (4 inches long and 1½ inches wide) and appear alternately on the twigs. Each leaf has a pronounced pointed (acuminate) tip that is often curved backwards and twisted, making it easy to identify this tree among other Ficus species.

The weeping fig tree is monoecious, meaning each tree bears both female and male flowers. The flowers grow and remain completely sheltered inside a fleshy, hollow receptacle called a syconium. On all fig trees, this type of flowering structure (inflorescence) is also the fruit. The enclosed flowers are pollinated by tiny wasps that enter the syconium’s small hole at its terminal end. After the flowers are pollinated, the resulting spherical fruits (1/3 to ½ inch in diameter) usually appear in pairs, are green when young, and turn orange-red when mature. The fig fruit is technically edible; however, it is usually only eaten by birds.

Its bark is light gray and relatively smooth when young; this surface changes to raised horizontal lenticels as the tree matures. At any age, the bark is quite a contrast to the glossy foliage and accentuates the trunk and the often deeply contoured and statuesque limbs.

The weeping fig is native to a wide area extending from the tropical regions of eastern India, Southeast Asia, Indonesia and northern Australia. In all areas where it is endemic, it is highly valued and valued for its dense shade, for firewood, and for many medicinal uses. In Thailand, it is so revered for its beauty that it has been designated the official tree of Bangkok.

The weeping fig belongs to the Moraceae or Mulberry plant family, which includes all fig trees, including the Ficus carica species, which bears the delicious edible figs found in markets around the world. The botanical name for the weeping fig tree is Ficus benjamina. The genus Ficus is the Latin name for the edible fig. The specific epithet, benjamina, is derived from the Sanskrit word, “banij”, which means “banyan tree” (which also belongs to the fig family).

Mature weeping figs are often confused with Indian laurel figs (Ficus microcarpa, var. nitida), as they have a similar crown shape and identical bark and leaf color; the pointed, twisted leaf tips of the weeping fig tree set it apart from its cousin.

The weeping fig, although a tropical tree, is easy to grow in our Central Coast region and once established seems to be surprisingly drought tolerant. It appreciates deep watering during the dry season and during prolonged droughts. It is not cold-resistant, so it must be placed in a frost-free or protected place; otherwise, when temperatures drop below 30 degrees F, it can experience severe leaf and twig damage and dieback. It prefers well-drained, moist, loamy soil and full sun to partial shade.

There are many cultivars of weeping fig that have been developed in the nursery trade for use as indoor foliage plants, due to this tree’s ability to photosynthesize in low light levels. These cultivars were selected for variations in leaf color and/or white or yellow variegation. Many of these fine cultivars can also be used in our community as garden trees, either planted in the ground or potted in containers. The ‘Starlight’ cultivar has won the coveted Award of Garden Merit from the Royal Horticultural Society. Miniature cultivars, such as ‘Too Little’, are particularly popular with bonsai enthusiasts.

The weeping fig is not susceptible to insects or serious pest diseases, but is prone to some troublesome (but non-lethal) insects, such as Cuban laurel thrips (which roll up the leaves) and stem mealybug (which sucks the sap and deposits a sticky substance that creates sooty mold).

Warning: Like most species in the Ficus genus, the weeping fig will develop aggressive surface roots, which can be destructive to nearby structures and harsh landscapes, especially sidewalks. Always plant it in a location that provides ample room for its roots to mature. When planted in smaller spaces, it is advisable to prune it periodically to keep it scaled to the planting area and limit root expansion.

The Weeping Fig can be planted and then pruned regularly, to serve as a screen or hedge. However, it is best suited for planting in city parks and on large estates, where it will have the space to appreciate its full beauty and grandeur.

Tree of the Month items are sponsored by Santa Barbara Beautiful, whose many missions include raising awareness and public appreciation of Santa Barbara’s many outstanding trees and, through a long-standing partnership with the City Parks & Recreation Department, funding and planting trees along City streets.

Article and photos by David Gress