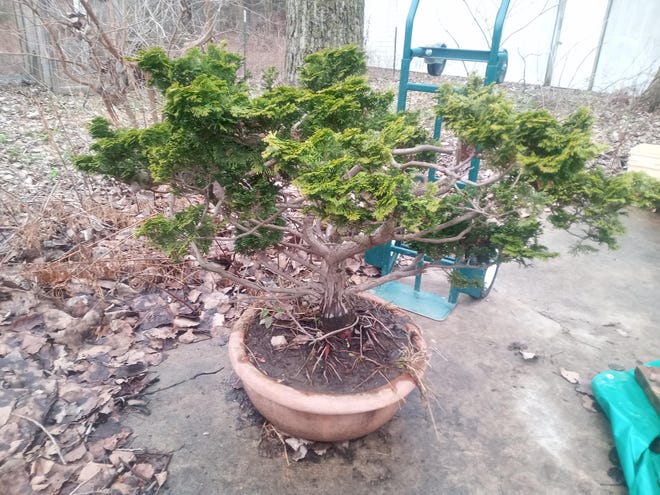 Twenty-two years ago, I wandered into a wholesale commercial nursery looking for the right trees for a special project I was working on.

Along with several other plants, I bought a small tree that will later become my bonsai. As I was wondering if I should buy it or not, a nursery worker passed by and told me he had seen it in the same place for the past seven years.

This little tree I brought home is a “Chamaecyparis obtusa”, commonly known as Hinoki Falsecypress, Japanese Cypress or simply Falsecypress

In their natural state, the species usually reach a height of 70 feet, but many dwarf varieties have been developed over the years. Mine is most likely one of those dwarf varieties.

Hinoki Falsecypress is a favorite species of bonsai artists in Japan. They are also traditionally considered a sacred tree in the Shinto faith.

When planted directly in the ground, these evergreens are hardy to zone 4, and as such, they require exposure to winter temperatures for some time as part of their life cycle. One way to achieve this with potted bonsai trees is to keep them outdoors but in a sheltered location.

Since the low temperatures in zone 4 can go down to -30 degrees, this temperature is really not a problem for these plants in my area in zone 6. Instead, we have to be careful of the sun bright and searing winds.

Winter winds can evaporate water from evergreen leaves and if the ground is frozen, the plant will not be able to move water to the leaves to replace lost moisture. As a result, the leaves wither and eventually die. Bright sun can make the problem worse.

To ensure bonsai trees have enough moisture for winter, they should be watered well before storing for winter.

Alternate freezing and thawing can damage the roots by “heaving”. The large temperature fluctuation causes the water to expand when frozen in the ice, which puts pressure on the roots. As the ice melts, the pressure is released and the liquid water moves into any empty voids present in the ground. Further freezing again causes pressure and again presses against the roots. If these freeze-thaw cycles occur often enough, the roots will be permanently damaged. Sometimes the plant can be pushed straight out of its pot and often the pot itself is opened.

I solve this problem by wintering my bonsai under a group of white pines. I tried other areas such as under piles of woodchips, under straw bales, in a partially heated house, and under homemade teepees, but eventually settled in this spot.

Pine branches shade the area and very effectively slow down the movement of windy air.

I also partially bury my trees to take advantage of the insulating effect of the ground. The surrounding earth freezes much more slowly than a small pot of earth and vice versa, it also thaws very slowly. This effectively eliminates the freeze-thaw problem.

As you can imagine, the first time I dug the hole for storage, there were a lot of pine roots to contend with. Over the years, the roots have been pruned in this place so much that only a small amount of fine roots enter the hole, which makes digging easier.

White pines shed needles every year, and they make a great mulch to cover my plants. They combine with the ground to provide even more protective insulation for trees. I just pick up the number of pine needles I need from the immediate area. They work better than most types of mulch because they tend to stay drier and swell more all winter long. Many other types of mulch can become waterlogged and matted over time.

Due to the mild late fall and early winter, this year was the last of the season I put my bonsai away. There was no point in putting them away earlier with relatively mild temperatures and frequent rains so I left them outside to enjoy an extended autumn as long as possible.

With single digit temperatures sure to befall us, my bonsai will make it through another Michigan winter safely in their sheltered winter home.

Bonsai and the power of small trees