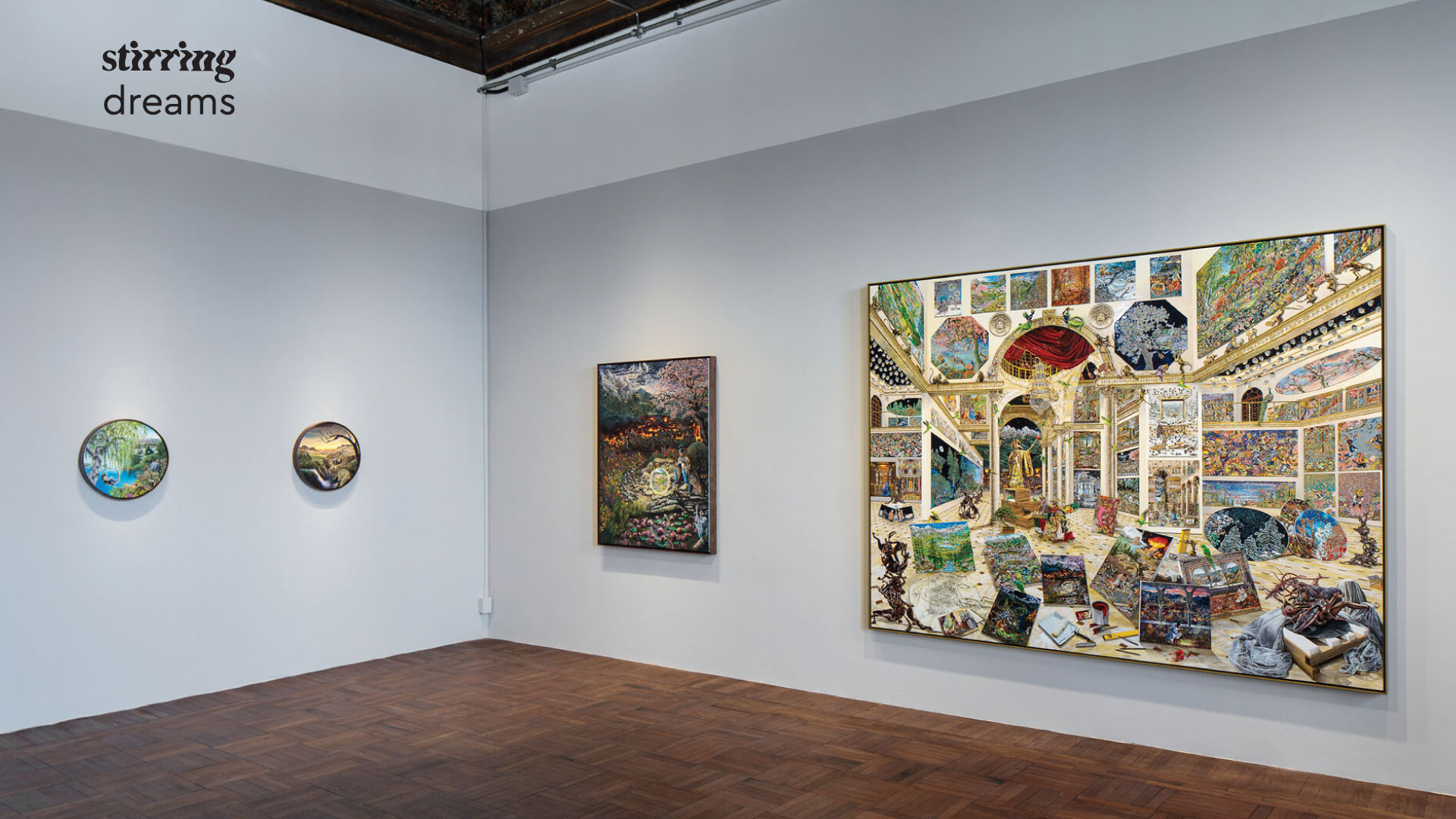 In this city that looks like a maze of alleys and canals, the Venice Biennale is an organized world of mystery, fear and magic. Amid multiple artistic moments popping up all over the floating city, one of the highlights not to be missed is Raqib Shaw’s solo exhibition at Ca’ Pesaro – in the middle of the 17e century baroque palace designed by Baldassarre Longhena. As part of the expanded program of the 59e edition of the Biennale, this important Venetian structure has been transformed into a splendid “Palazzo della Memoria” or “Palace of Memories”. Curated by Sir Norman Rosenthal, the exhibition immerses the viewer in the world of Shaw’s myths and times, as he tells us through his 12 intricate tapestry-like paintings. “Executed with a meticulously detailed and uniquely calibrated sense of design and color, calculated to amaze […] each painting takes time to discover ever more by looking further afield,” says Sir Rosenthal.

Born in Kolkata (then Calcutta) in 1974 and raised in Kashmir, the London-based artist’s recent body of work features a blend of cultural aesthetics and a contemporary interpretation of long-established pictorial traditions. His art blurs the line between past and present, the real and the imaginary, the grandiose and the horrible. Amidst all of these depicted dichotomies, Shaw’s enameled art and miniature detailing invites delaying these mystical complexities and ultimately ending up in pure magnificence, what I would call the magnum opus or the ultimate grand finale of this exposure.

Shaw’s art is a meeting point where east meets west. There is a diasporic sense of identity, time and space that is brought out through certain selected elements in his paintings. Each piece – quite often on a monumental scale – possesses a unique aesthetic, an imaginative aura and a subtle hint of connected personal history. The only constant through these traversing paradisiacal landscapes is the self-representation of Shaw, quite often accompanied by his “furry friend”, Mr C and his own South London Garden, which unwittingly inspired the conservation of his pictorial landscapes. “During lockdown I had the opportunity to create an alpine rockery at the studio with the intention of putting the compositions of the latest paintings in the garden which acted as a life study as well as a theatrical backdrop where the drama of life was re-enacted and thus documented with the usual exaggeration and manipulation that paintings demand,” the artist shares.

Shaw transfigures his garden into a verdant backdrop for the now lost world of Kashmir, and for the imaginary paradise of a childhood landscape tinged with the melancholy of exile. The evocative landscape is almost reminiscent of the eternally etched but infamous exodus from Kashmir pundits in the 1990s. His art has a diasporic sense of Kashmiri culture. Recalling this rich culture, Shaw says, “I always want to think of Kashmir as the birthplace of Shaivism, the land of the Sufis, with the unique language spoken mostly in metaphor, where people are inseparable from nature and the incredible beauty that surrounds them. , a culture deeply rooted in animism where humans lived in harmony with nature. Unfortunately, now it’s different from my romanticized view based on the stories of the past.

His art is autobiographical in nature. Each design draws a direct imaginary parallel to the life of Shaw, who came from a merchant family. His early experiments with all things antique—heavily embellished rugs, exotic fabrics, and gleaming gilt jewelry—result in highly intricate and brightly colored opulent imagery. Recalling a very personal memory shared by Shaw, “The most relevant object from this period would be the Jamevar Shawl was introduced to me by the person closest to me in my family (who unfortunately passed away during the first months of the pandemic), who became in a way the metaphorical symbol of my association, my relationship and my memories of the past, appearing in many paintings until consumed by flames in The Final Submission in Fire on Ice”.

In order to achieve this distinctive visual lexicon, Shaw incorporates a painstaking method reminiscent of the cloisonné technique – an ancient art technique used to decorate metal objects and ceramics. Thus, these enameled details ask the eye to wander and fully soak up Shaw’s parallel universe.

While Shaw’s visual aesthetic draws from his cultural roots and background, the artwork’s composition and formal structure draw inspiration from legendary Italian Renaissance greats such as Tintoretto, Giorgione and Giovanni Paolo. Panini. Reflecting on his first encounter with these Italian masters, Shaw shares, “Although I have admired these paintings since my salad days, it was not until just before the 2020 lockdown that I first traveled to Venice to see these flesh-and-blood masterpieces. Considering the historical importance of Venice as a city built on trade that linked East and West and also gave the world some of its greatest artists, it seemed natural to me to converse with the Venetian masters as a painter of Asian descent…perhaps a contemporary hybridized perspective of sort of reversal of roles between Orientalism and Westernism.

The grand finale of ‘Palazzo della Memoria’ must be a painting that celebrates Shaw’s absolute talent, his indefinable magnificence and an organized world of awe, magic and glamour. The artist’s masterpiece, The Retrospective 2002-2022, almost sums up Shaw’s two-decade artistic career, transposing some of his major early 2000s Holbein-inspired works to pieces currently on display in the ongoing ‘Palazzo della Memoria’. “I wanted to paint an image that would document all the major paintings to date, chronological not only my development as a painter but also as a human being,” Raqib explains. “It also satarizes the notion of a great artist and comments on the fleeting and impermanent nature of our existence,” he adds.

A relatively modest title, The retrospective, has the feeling of looking back while maintaining a strong constant in the present. Painted over nearly half a decade, this masterpiece explores the notion of painting as memory aid. The same idea was explored almost two centuries ago in 1757 by Giovanni Paolo Pannini. The stormy Himalayan foothills of Kashmir form the background while some of his recent painterly interpretations occupy the foreground. It is indeed an aesthetic chaos that requires a keen eye to gradually break down each element and finally be surrounded by pure magic.

Shaw’s panoramic palatial structure becomes a blend of several architectural tropes – oval Renaissance dome, Noe-classical pillars, Art Deco floors, French Baroque windows, medieval Victorian crystal chandelier and Mughal jharokha balcony at the top. Commenting on the common thread behind this blend of aesthetics, Shaw says, “I think the constant common should be the eternal pursuit and consequent expression of what it means to be alive and human through the medium of fine art. The astonishing ability of man to create works of exceptional beauty that celebrate life in all its guises while going through intolerable adversity, thus turning negative into positive is a remarkable quality that only we possess as species.

Amidst all this surrounding hubbub, the entire composition centers on Raqib Shaw holding ‘Mr. C’, dressed in a richly embroidered silk coat and a fanciful headdress. Don’t miss the pride of place given to the bonsai, elegantly parked at the foot of Shaw’s rustic pedestal! It almost seems like Shaw, a great magician at work, is ready to cast his magic and bewitch us as we encounter the grandeur of Memory Palace.

Creating Bonsai — The Hidden Gem of Gardening in Niagara