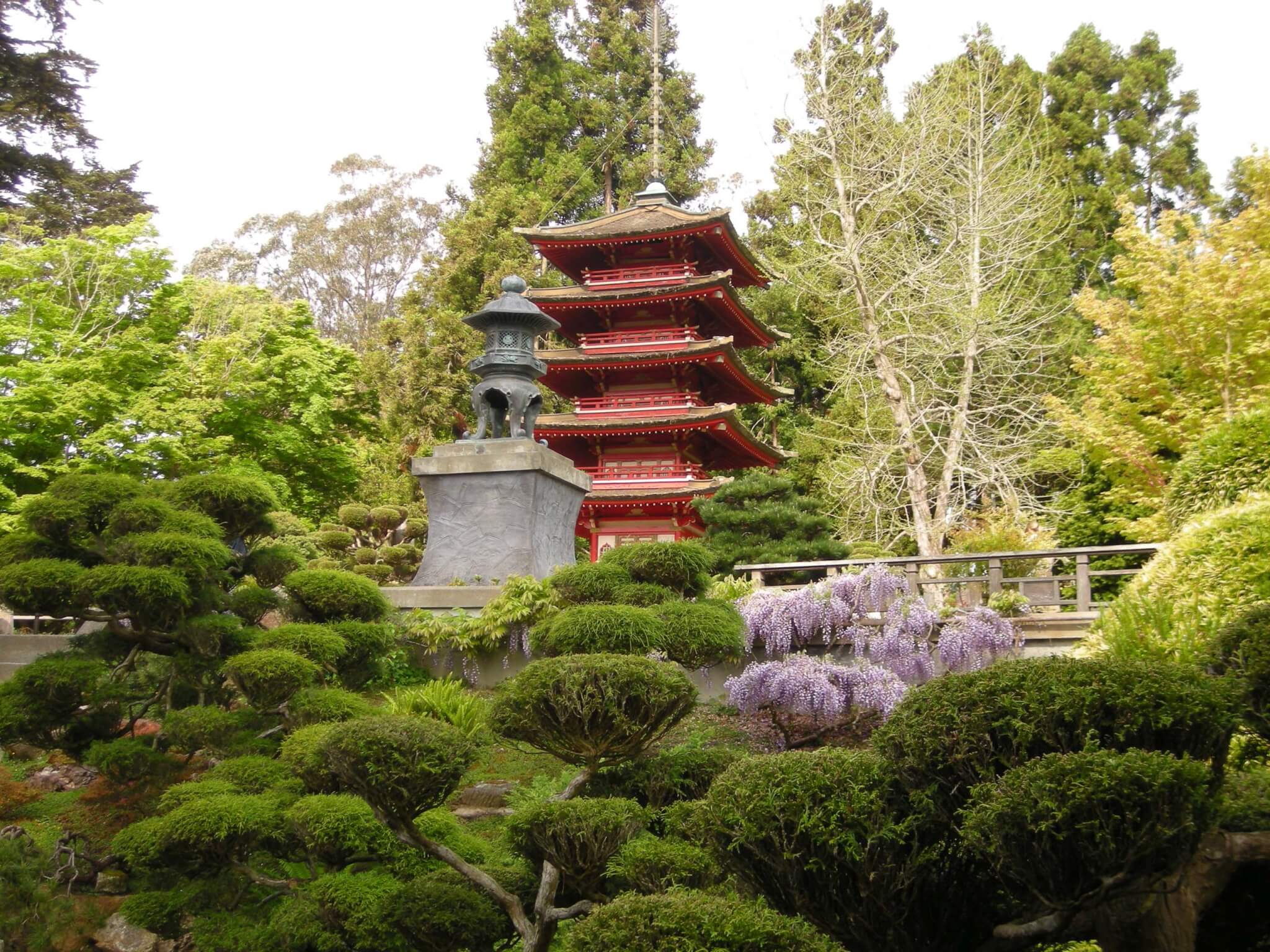 The tiered roofs and bright red paintwork of the five-tiered wooden pagoda set up in the Japanese tea garden in San Francisco Golden Gate Park stand out against the site’s lush, Zen-like landscape, with bonsai trees, azalea-draped waterfalls and a Mount Fuji-inspired hedge. The tower was first erected as a Food Palace during the 1915 Panama-Pacific International Exposition and, somewhat miraculously, has survived over a century, recently emerging from a restoration effort two-year-old that involved replacing the roof shingles on all five levels, repainting its red exterior and re-tuning its long-silent bells.

The pagoda was never meant to go outside. Unlike most constructions of pagodas, ornamental multi-tiered towers common in East Asia built to fulfill religious or commemorative functions, this structure was first housed indoors during the 1915 exposition. , then moved to the Japanese Tea Garden, which is the oldest Japanese public garden in the United States. having been built for a previous the World’s Fair held in San Francisco, the California Midwinter International Exposition of 1894. The structure stands 52 feet in total; the tower itself is 36 feet tall and is reinforced with a 5-foot concrete base and a 12-foot spire.

Today, the Japanese tea garden, a 5 acre property with native Japanese vegetation, koi ponds, seasonal cherry blossoms and a number of traditional Japanese structures, acts as an inviting public green space for locals and visitors alike. The space was first designed as the Japanese village for the California Midwinter International Exposition. After the fair, Japanese landscape architect Makoto Hagiwara extended the landscape to 5 acres, solidifying its future use as a public garden. Hagiwara lived at the site until he was sent to an internment camp in 1942, never to return. This event prompted a series of new additions and demolitions over the following years in an effort to remove any Japanese affiliation from the garden.

Among these changes were the razing of the Shinto shrine and the removal of the Torii gate. The pagoda was also not immune to change. In 1943 it moved locations in the garden to its current location near the Temple Gate, a similarly ornate structure also brought to the site after the conclusion of the Panama-Pacific International Exposition.

Restoration work on the pagoda started just before the pandemic. The structure was surrounded by scaffolding during the painstaking restoration process, which involved closely matching rotting building materials with products that would allow the monument to survive another 100 years. As reported by The San Francisco ChronicleSteven Pitsenbarger, the site’s chief gardener, said demolishing the pagoda and building another in its place would have been “easier” than the $1.1million renovations, which were mostly undertaken by the Recreation and Parks DepartmentThe carpentry team.

Deteriorating roof shingles on each of the five levels were replaced with redwood and cedar salvaged from old water reservoirs at Camp Mather, a city-run summer camp near Yosemite National Park. The previously lead-based paint was also stripped and replaced with a water-based latex; the shade is Shiaru, a deep reddish orange. The custom-made copper and brass hinges that adorn the pagoda now replace the original ornamental elements and its brass bells will ring softly for the first time since the 1915 World’s Fair.

While work on the pagoda itself is complete, the Japanese Tea Garden’s $2 million renovation effort is not yet complete. Then, the concrete base on which the tower rests will be covered with rock from a Japanese quarry. This fall and until next year, the second stage of the landscape revitalization project and the bridge adjacent to the Japanese Tea Garden will begin.

The restoration of the pagoda is a testament to the hard work undertaken by the San Francisco City Parks and Recreation Department and the volunteer organization Friends of the Japanese Tea Garden. Just 3 miles east of Golden Gate Park, another enduring symbol of Japanese culture in Fog City is also set to get a facelift. Japantown’s Peace Plaza, a sprawling public space anchored by a concrete pagoda designed by modernist architect Yoshiro Taniguchi, recently received state funding for a massive improvement project. This renewal effort is expected to be completed in 2025.

10 Best Bonsai Plants For Your Home According To Bonsai Experts