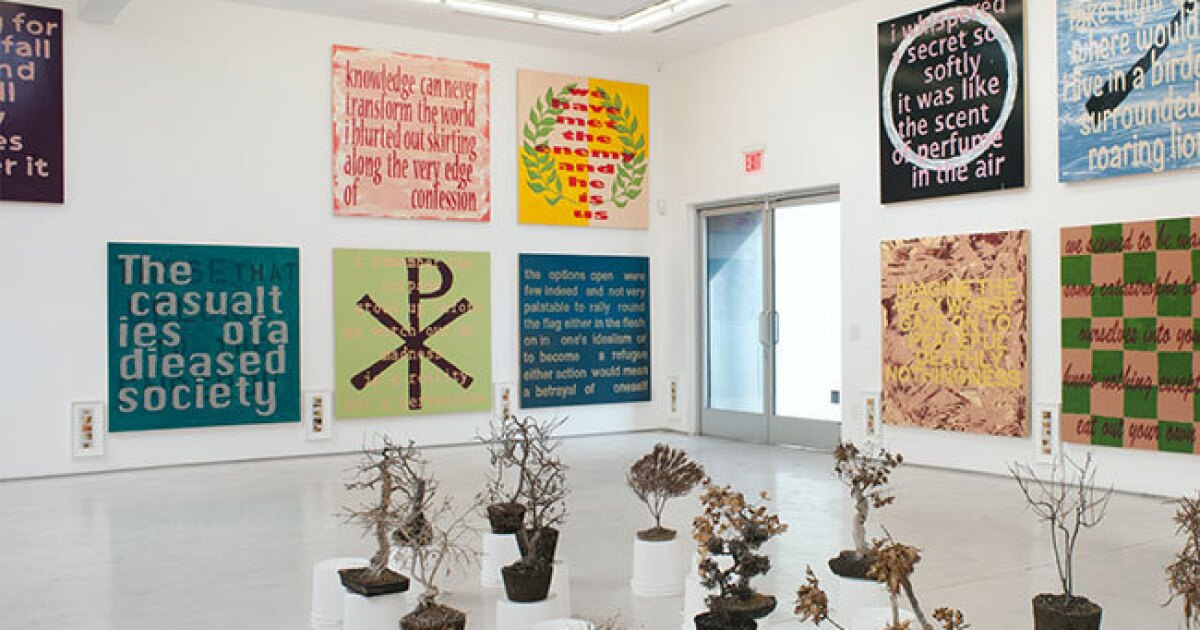 In a whirlwind of exhibition at Roberts & Tilton, Daniel Joseph Martinez confirms his reputation as a brilliant mad philosopher. Inspired by the medieval ‘Fool’s Ship’ in which the mentally ill were housed on stray ships, Martinez performed his own undocking ritual, obsessively riding LA buses to observe passengers.

The result is a room filled with paintings in the style of the city’s vernacular and colorful signage, inscribed with Martinez’s observations and statements. These are interspersed with collages of small intimate Polaroids. They are presented as self-portraits, but are actually ambiguous close-ups of what could be body parts or feces or possibly rotting food. At the center of this maelstrom is a flotilla of uprooted bonsai trees, symbols of death, to be sure, but also vestiges of lives subjected to extremes of confinement and control. In an adjacent room are accompanying photographs of storefronts on which Martinez wrote his thoughts in graffiti.

His thoughts are, for the most part, rather gloomy, lamenting “the victims of a sick society” or that “we have met the enemy and he is us”. These are lifted by occasional beauty moments: “I whispered a secret so softly it was like the smell of a perfume in the air. The overall effect is a moving sight in a furiously creative, albeit desperate, mind frustrated by the limitations of body and body politic.

Huntington president to retire in 2015

In training since 1625: How a 390-year-old bonsai tree survived the atomic bombing of Hiroshima