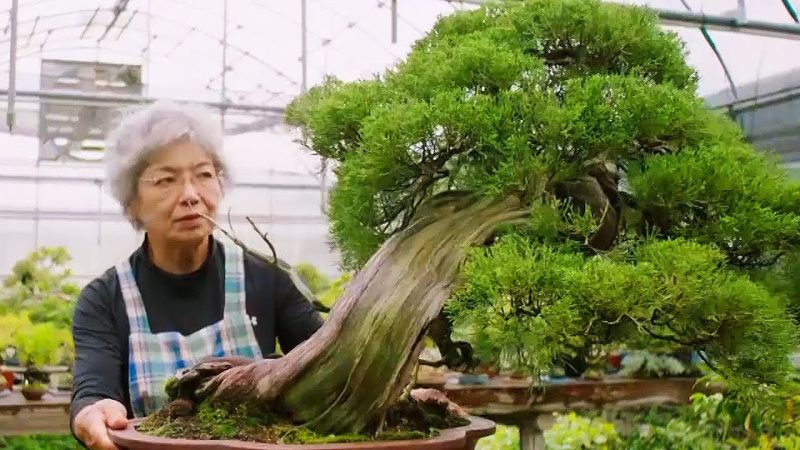 We all know what to think of when we hear the term bonsai: dwarf trees. Or so Shinobu Nozaki titled his bookthe very first major publication on the subject in English. Dwarf trees came out in the 1930s, shortly after the Japanese art of bonsai began to attract serious international attention. But the art itself dates back to the 6th century, when Japanese embassy workers and Buddhism students returning from stays in China brought back all the latest Chinese novelties, including plants growing in containers. Six or seven centuries later, as the scrolls show us today, Japan had taken this horticultural technique and refined it into a practice based not only on miniaturization, but also on proportion, asymmetry, l he intensity and erasure of the artist’s traces, one that produced the kind of miniature trees that we recognize today as works of art, even masterpieces.

Needless to say, bonsai trees do not form on their own. As the name suggests, which means “planting tray” (盆栽), bonsai work should begin with planting a specimen in a small container. From then on, it requires daily attention not only to provide the proper amounts of water and sunlight, but also to careful pruning and trimming with trimmers, hooks, yarn and all the rest of the surprisingly wide range of tools of the bonsai grower.

You can see a Japanese art master named Chiako Yamamoto in action in “Bonsai: the endless ritual” the BBC Earth Unplugged video at the top of the post. “Shaping nature in this way requires undying devotion with no prospect of completion,” says its narrator, a point underscored by a bonsai under Yamamoto’s care, originally planted by his grandfather more than 100 years ago. a century.

You’ll find even older bonsai trees at the National Bonsai Museum at the US National Arboretum in Washington DC In the video “Bonsai will make you a better person” curator Jack Sustic – an American who was first exposed to bonsai in the military, while stationed in Korea – shows a Japanese white pine “in formation” from the year 1625. This unusual terminology reflects the fact that no bonsai work even reaches a state of completeness. “They’re still growing,” Sustic says. “They are constantly changing. It is never a finished work of art. In National geographicit is “American Shokunin” just above, the titular bonsai grower (shokunin has a similar meaning to “craftsman” or “craftsman”), Ryan Neil, trained in Japan and based in Oregon, expands on what bonsai teaches: not only how to artistically grow small trees that look like big ones, but what it takes to commune with nature and achieve mastery.

“A master is someone who every day tries to strive for perfection in their chosen business,” says Neil. “A master does not retire. A master does not stop. They do it until they are dead. And since a bonsai work literally survives its creator, the pursuit continues long after his death. The bonsai master must be aware of the aesthetic and philosophical values ​​carried by the generations that preceded them as well as the generations that will come after. Wabi-sabi, as bonsai practitioner Pam Woythal defines itis “the Japanese art of finding beauty in imperfection and depth in nature, of accepting the natural cycle of growth, decay and death”. Shibumi (or in its adjectival form shibui) is, in the words of Jonathan Rodriguez of I Am Bonsai, “the simple and subtle details of the subject”, are manifested for example in “the apparent simple texture which balances simplicity and complexity”. Seen correctly, a bonsai – leaves, branches, pot and all – reminds us of the important elements of life and the important elements of art, and of the fact that these elements are not as far apart as we assume.

Kintsugi: the age-old Japanese craft of repairing pottery with gold and finding beauty in broken objects

The Philosophical Appreciation of Stones in China and Japan: A Brief Introduction to an Ancient Tradition

Wabi-Sabi: a short film about the beauty of traditional Japan

Based in Seoul, Colin Marshall writes and broadcasts about cities, language and culture. His projects include the book The Stateless City: A Walk Through 21st Century Los Angeles and the video series The city in cinema. Follow him on Twitter at @colinmarshall Facebook.

Lord of the Little Things: Growing One Bonsai at a Time | News from Meerut

Tips for surviving a dry January