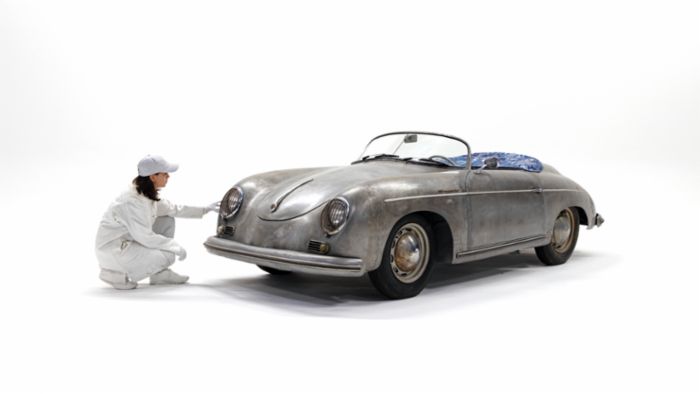 In his latest project, Daniel Arsham bows to Japanese craftsmanship: Based on his 1955 Porsche 356 Speedster, the American artist has redesigned the nearly 70-year-old sports car – laying bare the raw materials that make up the car and embracing the rich history of the vehicle through the Japanese aesthetic concept, Wabi Sabi.

Within two years, Arsham took steps to reveal the vehicle’s age and wear, drawing on the car’s production history, inspired by Arsham’s respect for Japanese culture. and its many specialized craftsmen. The acceptance of “imperfection” and the search for peace in the natural processes of time shines through in both the stripped raw metal exterior and the indigo dyed interior of 356 Bonsai.

For the exterior of the 356, Arsham stripped all the paint from the car, removing the original finish and years of restoration, revealing all the welds, pitting marks and natural wear over time. Now only a coat of linseed oil protects the raw metal from the weather, in keeping with the original Japanese manufacturing processes. On the vehicle’s rear engine grille, Arsham added a patinated bronze relief in the shape of a bonsai tree. However, the weathered exterior doesn’t stop at the bodywork, as the artist also found fully worn original components for the rest of the exterior – from the headlight covers to the vintage license plate.

Although the exterior of the car may appear worn, the 356 Bonsai is fully drivable, with all function-related components, including the original numbered engine, having been restored to factory standard. For the technical work, Arsham collaborated with Willhoit Auto Restoration and the Bridgehampton Motoring Club.

“The 356 occupies such an attractive position in the Porsche catalog as a starting point for the heritage marque,” says Arsham. “The nearly 70-year-old vehicle contains the roots of the modern Porsche brand we know and love in its purest form.”

Arsham ruminates, “Throughout my career, I have looked to Japan as an inspiration for their love and dedication to craftsmanship. These sensibilities were the basis of Bonsai 356. We produced all textiles in Japan using traditional artisans.

For the vehicle’s interior, the artist worked alongside Japanese fashion designers Motofumi ‘Poggy’ Kogi and Yutaka Fujihara to outfit the entire interior with traditional Japanese fabrics ranging from patchwork boro to Japanese selvedge denim. For the driver and passenger seats, as well as the boot cover, these are made of patchwork boro textile dyed with indigo. Originally, this Japanese mending technique was used to extend the quality and durability of garments, taking into account the natural wear and tear of local workwear. Along with the boro, Arsham added more indigo-dyed cotton fabric punctuated with sashiko stitched lines on the door trim and seat edges. As the final fabric, Arsham and his team produced a Japanese denim to cover the roof, covering the interior of the car. These three fabrics work together to reinforce the Wabi Sabi influence on the car as a whole – selectively choosing materials meant to evolve with use and age.

In the trunk, a Japanese tatami is under the spare wheel in the luggage compartment. Made of rice straw, these mats are a classic element of Japanese architecture and are commonly laid as flooring in living areas. The connection between the interior of the car and the architecture of the house is a detail that recalls the artist’s admiration for the omotenashi, like the wabi-sabi, better experienced than explained: the warmth and the reception of guests in a house.

Daniel Arsham was born September 8, 1980 in Cleveland, Ohio and grew up in Miami, Florida. As an iconic artist of our time, Arsham breathes new life into the everyday, structurally experimenting to connect the past, present and future in unexpected forms. His work is distinguished by subtle changes, especially when he merges objects in order to transform familiar structures. The 356 Bonsai is Arsham’s third project involving a car from the Zuffenhausen-based sports car manufacturer. Porsche Japan plans to display the 356 Bonsai in Tokyo at the end of the year. 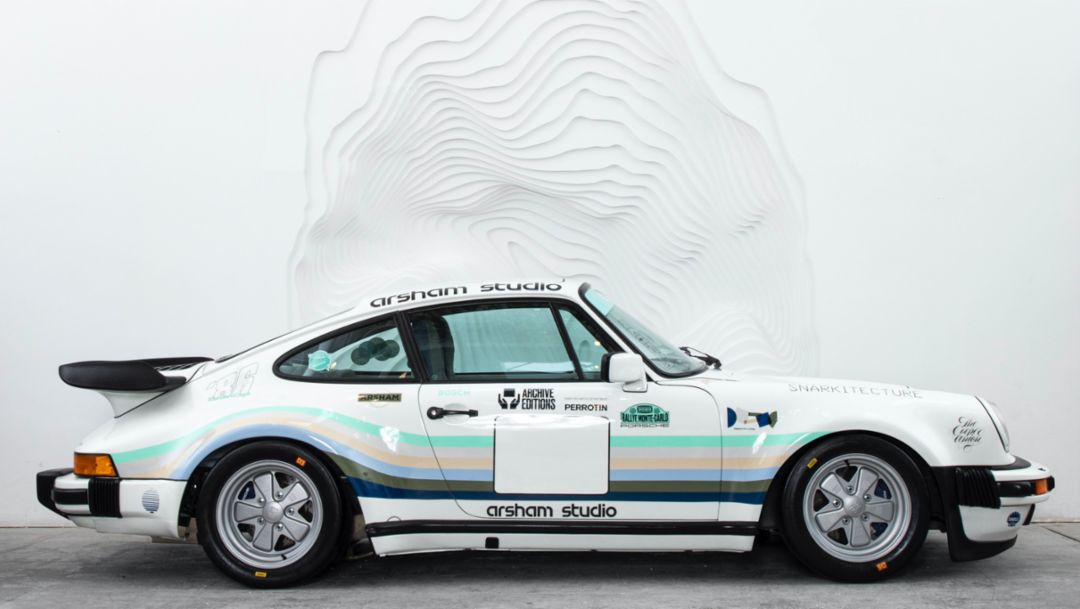 Daniel Arsham captures his life story in a 911 Turbo

As a child, Daniel Arsham spent his time drawing sneakers, cameras and various Porsche models, including the legendary 911 Turbo.