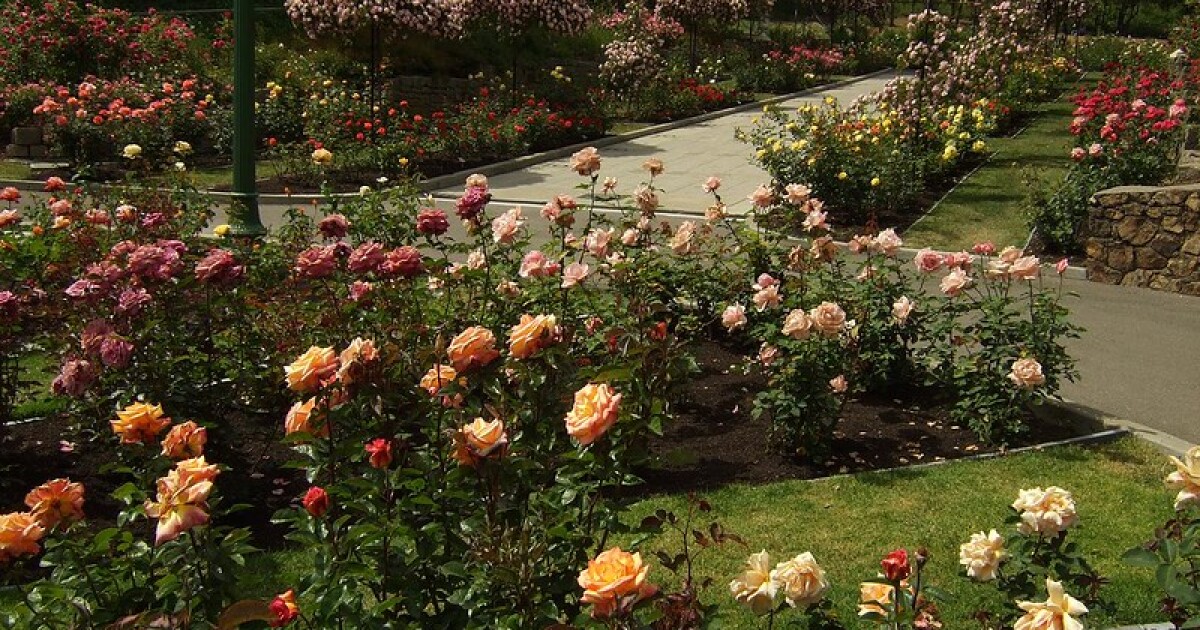 The dedicated volunteers who make the Oakland Rose Garden bloom

For nearly a century, the Morcom rose garden in the Grand Lake neighborhood of Oakland has brought beauty and respite to locals and visitors alike. Boasting a dazzling array of several thousand roses, multiple winding walkways, a reflection pool and cascading fountains, it’s hard to deny the magic of the public park.

I have been coming to this serene sanctuary sporadically for 20 years. But I have become a real regular during the pandemic. It provided some relief from the daily chaos, some sensory pleasure and peace of mind in a time full of fear.

So I wanted to meet some of the people who run the garden and find out how they responded to the challenges posed by the pandemic. People like Steve Garry. When I talk to him, he helps put the finishing touches on a new irrigation system.

“I was born on a ranch in the Central Valley and we had, at one point, 350 acres of nectarines, peaches and plums,” he tells me. “And so I know this kind of agriculture well. Now roses are a different story.

Steve has been volunteering at the rose garden for seven years.

“My grandmother had zinnias and things like that. Roses, I didn’t really know them,” he says. “But I got to know each other, I have roses at home. They tell you, you know, when you’re doing well and when you’re not doing well. They are quite sturdy. They are amazing.

“I’m a gardener in places,” says Jane Bicek, another volunteer. “I used to drive through the Rose Garden to the occasional carpool to work in San Francisco. So after I retired, I thought I had to give back to the public space.

When I meet Jane, she and several colleagues are busy weeding near the garden’s reflection pond.

“And we have a rosary consultant who comes in every day and works,” she says. “He’s our teacher.”

A rosary? I had never even heard the term. But I had seen an older man in jeans and a brimmed hat around here for years tending to the rose bushes whether they were in bloom or not. I often wondered what his story was.

“I am Royal Krieger,” he tells me, when I meet him on a particularly beautiful afternoon. “My wife and I bought a house in the late 70s. She wanted a small rose garden. And that quickly grew to about 50 roses. And the gardener said, ‘I’m not sure I can handle it.’ »

“Probably about four or five years later,” he says, “I was one of the participants in those demonstrations.”

He told me that his career had been in business.

“But then, as I started stripping myself about ten years ago, it led me to be the rosary here, which is, I tell you, the happiest hours of my day.

Reaching out to the group of volunteers, I kept running on the term “Dedicated Deadheaders”.

“Anyone can volunteer,” Royal says, “but to be a deadheader I basically have a program to teach to make sure they have enough knowledge to be dangerous enough to let go of them- same.”

I grew up in the city and the antithesis of a green thumb, so I needed clarity on what exactly deadheading entails. Because I sincerely thought the name referred to the Grateful Dead and the pleasure shared by the senior volunteers of their music! Not enough.

I wonder how quickly someone can learn to deadhead properly.

“It’s a skill that, frankly, takes time,” Royal replies. “And the more skilled you become, especially with some of the more complex roses, the more you’ll know in time – not only am I pruning for the next bloom, which could be in five, six, seven weeks, but I’m also trying to to prune the line, even for years to come.

He says it’s an art.

“Think of it in a way that people become bonsai masters. That’s what’s happening here. And that’s really an advanced level of great joy. And I always like to teach these aspects to people.

Walking on these lands always brings me great joy. It also feels a bit like time travel, especially when I pass the cascading fountain.

Royal shares with me part of the history of the garden. “The town acquired the property around 1915 at the request of a men’s gardening club. And then from 1932 to 1934, it was a WPA project.

Turning to Morcom’s current state and what sets it apart from comparable public gardens, Royal says: “You’ll find that they pretty much all have the same roses. I call them Mommy’s Pleasures.

But Royal tries to introduce new ones to Morcom every year. There are over 2,500 roses in the Florentine part of the garden.

“We have quite a few very, very rare roses,” he says. “In a few cases, we think we probably have the only ones in the world.”

Some of his favorites? Blush Noisette, introduced to the public in 1814, and those with unusual colors, such as Loco Coco and Honey Dijon.

“And then I like the more complicated roses and vines we have; the largest here is Mermaid and she is now about 40 feet wide.

And what, according to Royal, is the most fragrant rose here?

“It’s a French rose,” he said. “From the Grifferaie. It only blooms once a year, you just missed it. And you can smell that baby about a block away. It’s lovely. A great show.

Royal says some of the most serious enthusiasts rummage through abandoned graveyards and old farmhouses, looking for roses that might have been planted near a headstone a century or more ago. If they find one and it can’t be identified…

“That is then called a ‘found rose’. And the person who found it now has the pleasure of naming the rose. And so this one,” says Royal, pointing to a series of three flowers at the northern edge of Florentine, “is Huntington Pink.

Royal thinks this rose is only found here and at Huntington Gardens near Pasadenafrom which the Morcom received its cuttings.

As we continue to walk around, I ask about the audience’s use of this space.

“One of the busiest times is during prom season,” Royal replies. “On Fridays, and certainly Saturday nights, we will have up to 500 children and their parents, from distances from Vallejo and Fremont.”

They gather to have their picture taken before jumping into their limos and heading into town. He says there are also a lot of weddings and quinceañeras.

“Of course, the neighbors and the elderly, it’s there for them too,” he continues. “You can see there are many places where it’s very calm and quiet and beautiful, and a lot of people come, they’re grieving for whatever reason. And it’s also a wonderful place to heal.

That’s why so many people, myself included, have spent so much time here for the past two and a half years.

“It was like Grand Central Station during the pandemic,” says volunteer Jane Bicek. “I had never seen so many people come here!”

“We had to watch the place a bit, but it sort of worked out,” adds Royal.

What other challenges did they face?

“And then, shortly after,” Royal shares, “we had this turkey that went rogue.”

Oh yes. The infamous turkey who began to terrorize visitors to the garden.

“He started chasing and then attacking people,” Royal says. “That guy was a pit bull with wings!”

“Of course, it humanized this clown,” Royal continues. “And needless to say, Gerald and I bonded, and not in the friendliest way. And it was a serious and serious problem. Many people were seriously injured. We made our mark on the map and not exactly the way I wanted.

I could sense Royal’s slight unease as he discussed the turkey issue, but I gently pressed him to tell me more.

“Having got to know some of the people who are animal rights people,” he says, “I have to be very careful here.”

Basically, turkeys can tear up flower beds and rip out new growth.

“Not to mention all the poop they do,” adds Royal. “So, yes, they are attractive in a way. But for a rose garden, that’s a serious problem.

Wildlife emergency services eventually captured and moved Gerald to wild lands near Orinda, and Royal tells me that the few turkeys arriving now are much less aggressive.

So he and the other volunteers managed a wandering turkey, cursed an elusive rose thief, and welcomed visitors in record numbers, all with very little money.

“The city doesn’t provide us with any funds for the roses, any basic materials like that,” Royal says.

In place, several producers donate some of their stock when they can, and the garden raises funds for more.

“In his day, at one point, we had eight full-time gardeners,” adds Royal. “It was flawless. It was beautifully cared for. The city today has limited resources. Frankly, we’re lucky to have a part-time gardener.

And so they need these volunteers to cut weeds and prune dead flowers.

“As long as we leave,” Royal tells me, “they will continue to bloom. And we do. And you can imagine that with over 2,500 roses, and let’s say each rose only gets five, that’s 12,500 a month. So it’s a lot of work. And we obviously only have a handful of people, but we’re doing our best.

Despite limited means, it is clear to me that Royal, the dozen Dedicated Deadheaders and the entire group of volunteers are all deeply committed to preserving this garden as a place of joy, connection and colorful contemplation.