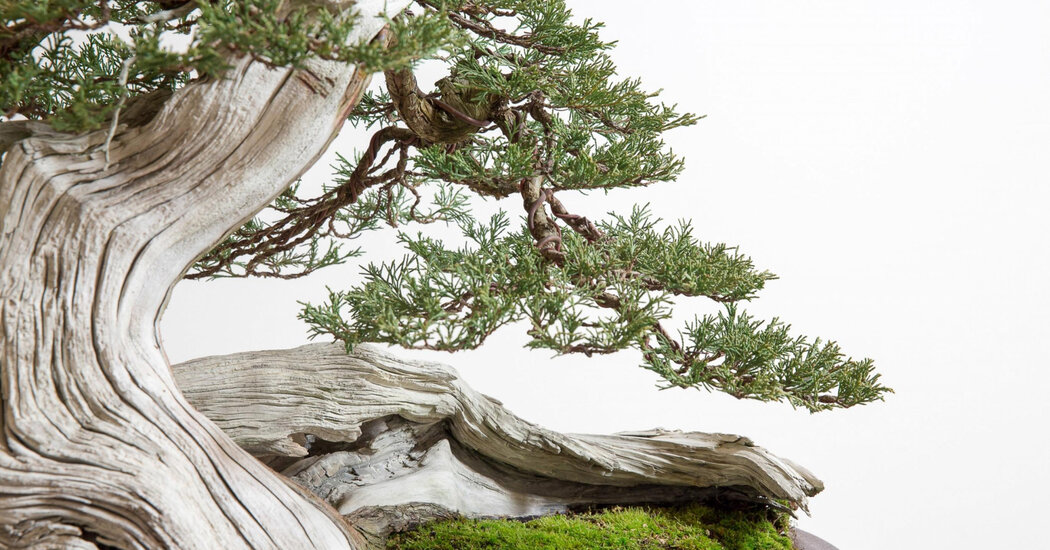 The practice of miniaturizing factories is believed to have come to Japan from China around the 7th century, when the two countries formally established diplomatic relations. At that time, Chinese gardeners had probably created potted landscapes, or penjing (“pot landscape”), for hundreds of years, bringing nature into the homes of political elites, painters and calligraphers. Penjing, as it developed over the centuries, did not idealize nature, but rather depicted – or, as some bonsai scholars suggest, exaggerated – its strange and expansive beauty. Until the 1970s, when the Chinese government began codifying five regional schools of penjing, each with its own approach to styling local species through cutting, wiring or pinching, there were few rules: the first guides published in the 16th and 17th centuries suggested that practitioners should attempt to emulate values ​​such as vigor and austerity depicted in classical landscape painting, says Phillip E. Bloom, the 38-year-old curator of the Huntington Library’s Chinese Garden, from the Museum of Art and Botanical Gardens in San Marino, California. Often the principles were abstract—a craftsman might have aimed, says Bloom, to “somehow create heaven in the tree”—which left penjing open to poetic interpretation.

By the 12th century, Japanese craftsmen and monks had also evolved the art into a form of controlled observation, later known as bonsai (“pot planting”); while the term itself had been around for centuries, it took until the Meiji era (1868-1912) for it to take on its modern meaning. By then, researchers had begun to rank such things as trunk shape, branch location, and preferred species – any locally grown woody-stemmed perennial with true branches and relatively small leaves, including including pine, maple, juniper, beech, elm, cherry and plum. Bonsai trees could range in size from a few centimeters tall to imperial trees that could exceed six feet. Regardless of size, species, or age, each tree exuded the sublime beauty of an ancient forest. Today, Hitomi Kawasaki, 41, a Kyoto-based bonsai curator and scholar, compares the ideal form of classic bonsai to the Kamae Nô theater posture, with the actor’s knees slightly bent and arms away from the body. “If you’re in that position, that’s the most stable point, and if you can let go, it’s almost like floating,” Kawasaki says. “With bonsai, it’s similar: there is a point of balance, you reinforce this point and everything takes shape.” When practitioners do this, their trees can survive them for centuries, their growth slowed, but never completely halted, by confinement; if the specimens are unbalanced, they eventually wither. Between control and abandonment, creation and destruction, life and death, art is, as Kawasaki writes in a forthcoming essay, “an attempt to find a middle way out of dualism.”