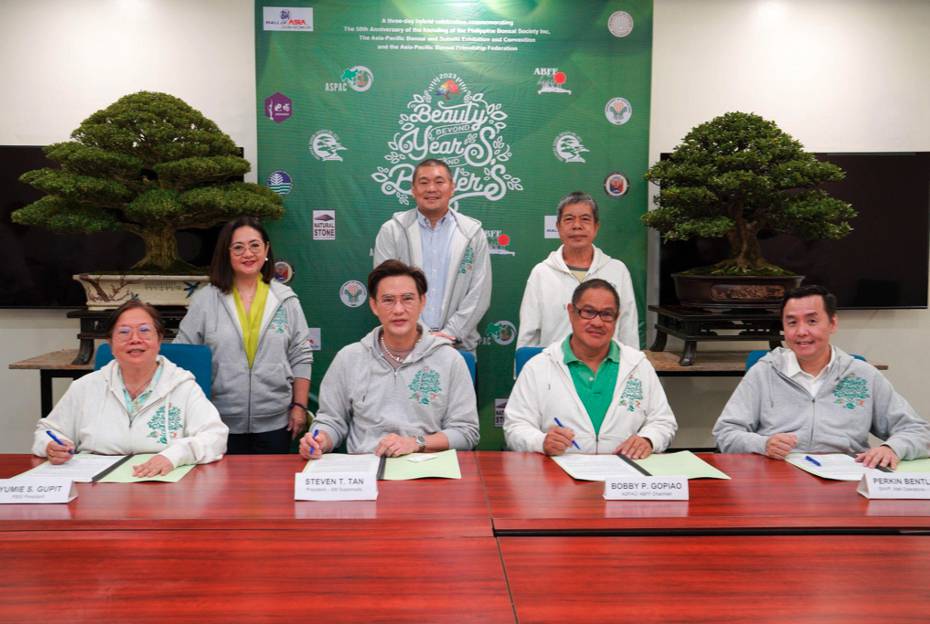 “Beauty beyond years, beyond borders.” is the theme that would undoubtedly be the biggest bonsai-related event in 2023. The Philippine Bonsai Society Inc. (PBSI), the first and oldest gardening club in the Philippines, has the distinction of producing, hosting and to manage a world-class event that will bring together the most prestigious Bonsai clubs from here and elsewhere from June 10 to 12, 2023 at the SM Mall of Asia (MOA) Complex.

The signing of the contract between the PBSI leaders and the senior management of SM Supermalls marks the start of the year-long preparations for the event. The three-day celebration that will take place in 2023 commemorates three milestones. The Asia Pacific Bonsai and Suiseki Convention (ASPAC), the Asia Pacific Bonsai Friendship Federation (ABBF) and the 50th year of founding of PBSI.

This makes this great partnership a once-in-a-lifetime event where it will feature a convention with overseas delegates from Asia-Pacific, attended by members of ASPAC and ABFF, the Asian group of the World Bonsai Friendship Federation (WBFF). These events also attract the participation of amateurs from other countries outside the Asia-Pacific region.

Led by Show Chair and Past President of PBSI Lito “Boy” Pangilinan, PBSI has always held its shows nationwide with SM Supermalls as its club partner. SM Supermalls provides sites nationwide free of charge and assists the organization with logistics. The said events will take place at three locations within the SM Mall of Asia complex: the main exhibition will be held at the Mall of Asia Music Hall, which will feature bonsai trees, suisekis (natural stones), and ikebana (flower) arrangements; at the mall’s central atrium (a space adjacent to the Music Hall); and at SM By the Bay where there will be stalls selling plants and everything related bonsai and garden.

The show, which will be led by Mr. Floy Quintos, will feature approximately 300 show-quality trees, 200 suisekis, and 50-100 ikebana provisions. There will also be a gallery showcasing photos of the best bonsai trees from Asian and Pacific countries and the By the Bay garden stalls will coincide with the bonsai display, drawing plants and nature lovers in SM Supermalls during the entire duration of the exhibition.

The Asia Pacific Bonsai and Suiseki Convention is made up of national bonsai organizations from Asia and the Pacific, led by current President Roberto “Bobby” Gopiao. Only one national club per country is allowed within the organization, with PBSI being a founding member.

For more information about the event, you can contact Mr. Lito ‘Boy’ Pangilinan, Chairman of the Show and Immediate Past Chairman of PBSI, via mobile on 09088869113 or email [email protected]

Stay up to date on all the events happening at SM Supermalls. Visit www.smsupermalls.comand follow @smsupermalls on all social media accounts.