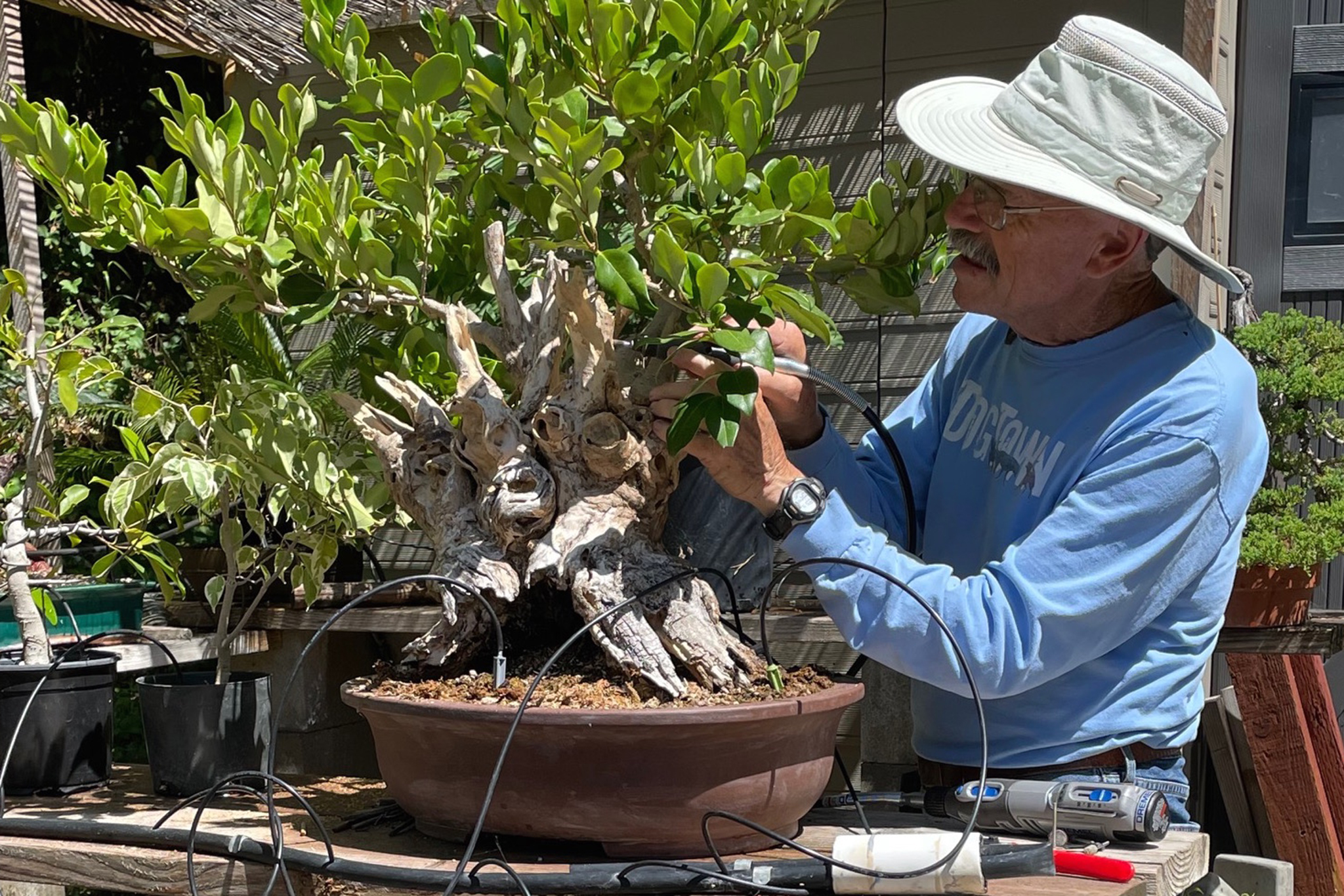 Charlie Mosse uses a Dremel on a privet. “We try to create age, and age takes time.”

It’s nine o’clock in the morning on a Wednesday, and in the grounds of the Japanese Friendship Garden in Balboa Park, a few bonsai enthusiasts move quietly among the birds and the dew, tending to their trees. They check the soil moisture, water, weed, prune and bind the branches with wire. Today they are also taking some time out of their usual business to tell me about the San Diego Bonsai Club and the art of bonsai in general. 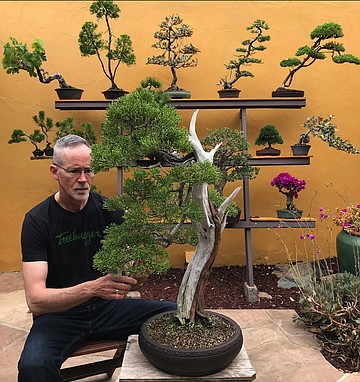 Neil Auwarter in his bonsai garden. “If you do something on your own, you are limited,” he says, praising the club.

The club’s president, Ignacio De La Torre, is present, as is the curator of the Japanese Friendship Garden collection, Neil Auwarter. They are joined by Charlie Mosse, a retired nurseryman and county employee, who has happily worked in the gardens since he was nine years old. All three are very experienced, with many years of bonsai under their belt. All three have a patient and thoughtful demeanor that I am inclined to see as a side effect of the meditative, down-to-earth activity to which they are so dedicated.

According to De La Torre, the SDBC is the largest such club in the United States. “Some have said the biggest in the world, which is quite possible. Last year we ended the year with around 500 paying members. Most clubs in the United States probably have between 35 and 50 members. An average meeting, held at the Casa del Prado, a stone’s throw from where we are, will typically involve around 70 people representing a wide age range; there are members in their 20s and others in their 90s. “One of the advantages we have is the two collections that we maintain. That of the Garden and that of the Safari Park. You go to Safari Park to see animals, and all of a sudden you come across this beautiful miniature tree pavilion and you’re fascinated by it, and you want to know more. I think we are able to generate a lot of memberships through fundraising. In addition to the collections, there are two annual shows – one in the spring (April 23 and 24 this year at the Casa del Prado) and another in the fall – which attract thousands of viewers and also generate a lot of interest. . in bonsai. 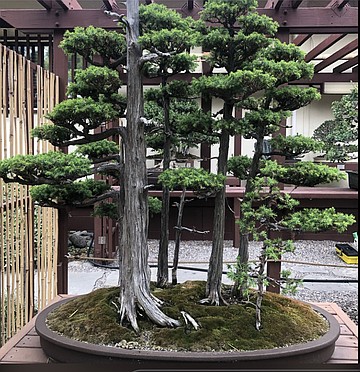 This opportunity to learn is part of the reason for forming a club around the type of ancient meditative practice that one might consider best suited to solitary practice. Neil Auwarter compares the beneficial effects of being part of the SDBC to crowdsourcing. “If you do something on your own, you’re limited to the quality of trees you can create,” he says. But the club brought him into contact with experience, knowledge and trees far beyond what he could work with individually. He mentions the highlight of getting to work with a “legacy tree” from the Safari Park collection that has been in cultivation for 400 years. “You can’t do that if you’re in a silo, doing your own thing on your own.”

As almost everyone knows, bonsai is an art that involves growing and shaping miniature trees. This essential element, notes De La Torre, is what often attracts people. This is part of what is inherently enjoyable about bonsai. “People love looking at miniatures of big things,” Auwarter says. He compares the miniaturized tree to a “reduction of sauce in the kitchen. It’s the same sauce, but you’ve distilled it, so it’s a stronger sensory experience. At this size, the entire tree can be seen at once: trunk, branches, leaves, soil, pot. 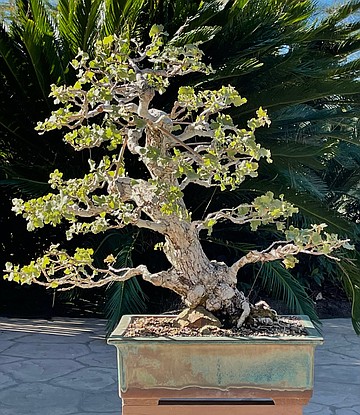 Scrub oak bonsai. At this scale, you can see the tree in its entirety.

But carefully managed bonsai pruning is only one of many elements involved in cultivation; there are many other desired formal qualities. Charlie Mosse mentions patches of bark where you might find rough old trees. “We also try to create age,” he says, “and age takes time.” Besides the small scale of the trees, the evocation of a sense of age and the passage of time is an essential element of the art. The roots, the tapering of a trunk, the gnarled limbs – it all shows the passage of time. The same goes for damage; for example, there is the inclusion of dead wood on bonsai, which is distinguished from its living counterpart by its ghostly pallor.

Auwarter repeats the idea that “bonsai is a four-dimensional art: the three spatial dimensions plus time”. He says that “a good tree tells the story of its life”, and he links the expressive features of the tree to a key idea of ​​Japanese aesthetics, that of wabi-sabi, which he sums up as “embracing the idea of ​​impermanence, incompleteness, and imperfection. Nothing is finished, nothing is perfect and nothing lasts. And this goes hand in hand with an appreciation of things that are old: asymmetry, age and sometimes breakdown”.

Mosse adds that “creating bonsai trees is truly a journey. To create real quality bonsai, it takes about 10 years minimum. The best cuts have been cultivated for 20, 30, 40 years. He says one member of the group has actually been working with the same tree for over 40 years now. De La Torre concludes: “There is a belief in bonsai that you are never done with a tree. You are simply developing it and you will entrust it to someone else to develop it. Unlike a work of art that is finished and you won’t touch it again, these continue to grow. You have to do something to keep it alive, and it will change over time.