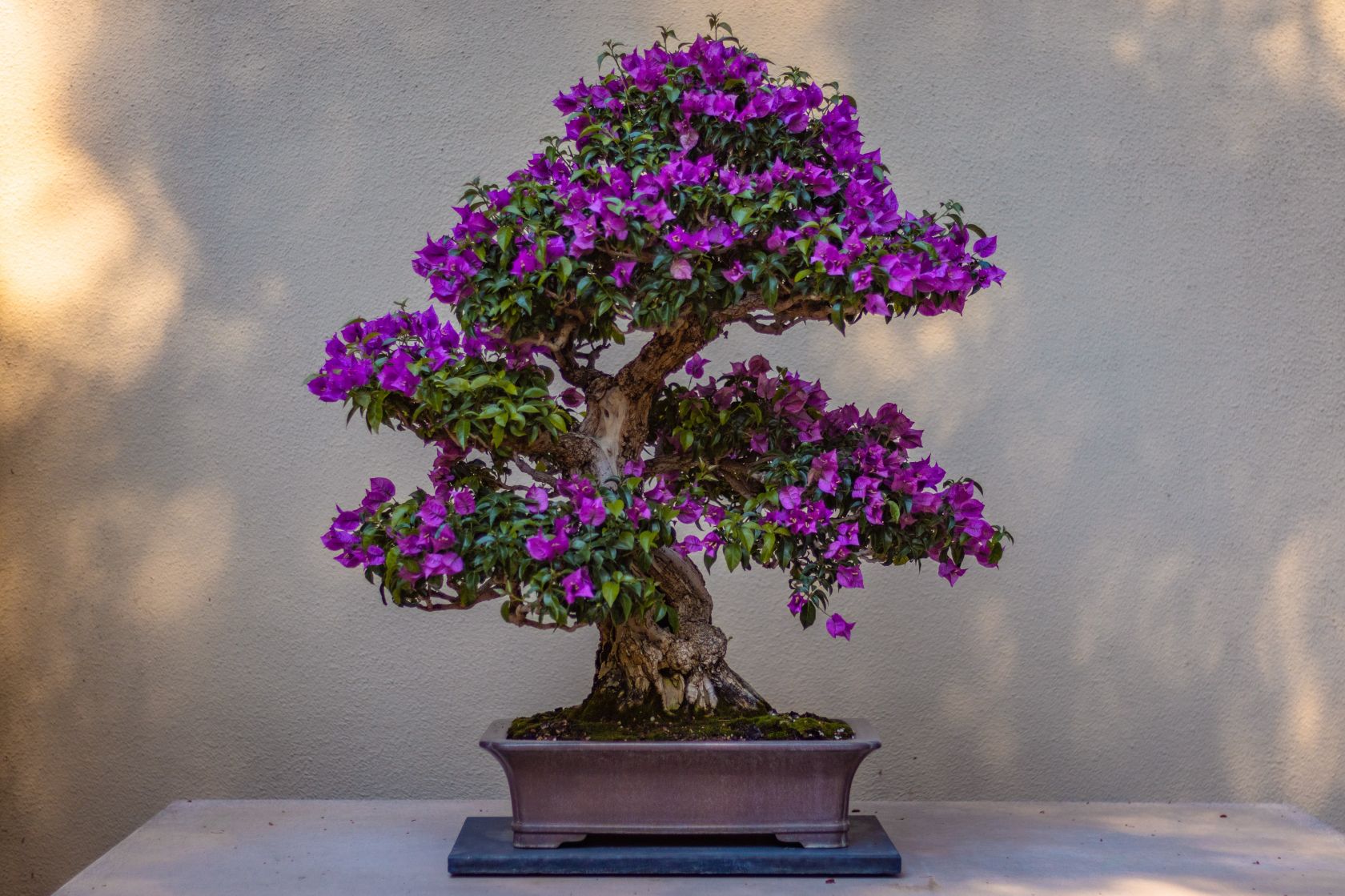 I always find these little trees a little friendly and almost serene, they have a delicate air and a zen side. The name ‘Bonsai’ is a Japanese word meaning ‘tree in a pot’ but the term originally comes from the Chinese word ‘pun-sai’ or ‘penjing’. In Chinese, “pen” means pot and “jing” means landscape or scenery. Bonsai trees are meant to be a miniature representation of nature, planted in decorative containers. When it comes to the Japanese art and science of bonsai, it uses masterful and meticulous pruning, training and maintenance techniques, creating a miniature version of a wild tree that is naturally lifelike and beautiful.

Enthusiasts are sometimes skilled enough to take care of a collection of different ones, with many different styles they can be fashioned into, each with their own name.

Almost any tree or shrub can be made into a bonsai, it is not a special type of dwarf tree. Specifically, bonsai is created from perennial woody-stemmed tree or shrub species that produce true branches and can be grown to stay small through pot confinement with crown and root pruning. In Japan, the famous Tokyo Palace’s Sandai-Shogun-no-matsu refers to a type of white pine bonsai, believed to be over 500 years old. It is considered to be the oldest known and extant bonsai specimen in the world.

My husband had a bonsai years ago he spent a lot of time with a pair of nail scissors cutting it and critically examining it from every angle and then I’m afraid I managed to get it kill, shamefully because I hadn’t bothered to take the time to inquire about his care.

I have now discovered (too late!) that the main cause of bonsai ‘death’ is under-watering – they have shallow roots and tend to dry out. They are finicky plants and can just decide to die quickly if not cared for properly, so it would be wise to get yourself a book or learn as much about them as possible before buying, or if you are good at it, make sure you to check know how to take care of it.

Watering is the tricky part and should be watered when the top layer of soil seems dry. Depending on the type and size of the tree, as well as the type of soil used, they may need to be watered up to once a day, so rather than sticking to a routine it is best to check frequently. You need to completely saturate the root system, keep watering until the water escapes through the drainage holes underneath, and I think most bonsai come with a little tray underneath to collect the excess water.

Conversely, overwatering is just as bad and will cause leaves to turn yellow and small branches to dry out. The roots drown in water and are starved of oxygen, preventing further growth, the cause may simply be poor draining soil. The best solution would therefore be to check it daily.

Another tricky aspect is shaping, sometimes branches are wired into the desired shape, and there are clubs and online courses for serious bonsai gardeners.

Where to place your bonsai? Some can be placed outdoors, depending on the type of tree – common species for bonsai are juniper, pine and spruce, and need to be exposed to the seasons, like their “mature” counterparts. Included are deciduous trees that lose their leaves, and include maple, elms and ginko. Wherever you decide to display one, they don’t like direct sun, so that’s something to keep in mind. Indoor bonsai are generally subtropical species that thrive in stable temperatures throughout the year. These include jade plants, Hawaiian umbrellas, and ficus trees.

So the tools come next. You can buy the cutest miniature tool sets, including special pairs of scissors, miniature rakes and shovels, tweezers – even mini watering cans – it depends how perfectionist you are, but mostly , you can use things you probably already have – an old teaspoon maybe – and like I said before, nail scissors worked for my husband!