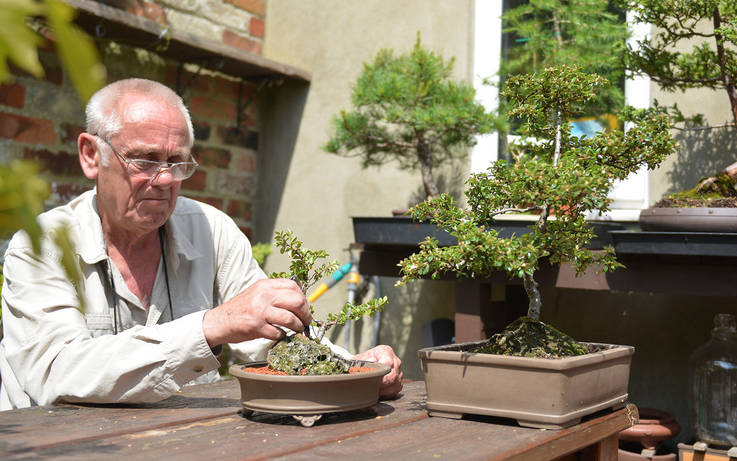 Why Small Is Beautiful For Bonsai Grower Frank – Features

A man from BARNARD CASTLE took 35 years to cultivate a veritable forest of miniature trees.
Bonsai artist Frank Smith’s back garden is a treasure trove of miniature firs, oaks, sycamores, and nearly every other tree found in the country. Ironically, until he moved to town in 1985, he didn’t know much about trees other than enjoying a walk in the woods. He said: “In 1987 we had half a beer barrel full of primroses out front. I was cleaning up the dead stuff when I found this item about 10mm high. When I took it out there was a conker on the end.
He realized that the passing children must have dropped their conkers into the barrel and one had taken root.
While searching the library for information on how to grow the tree, he found a book on the Japanese art of growing bonsai and decided to give it a try.
Mr Smith, a former prison guard from Deerbolt, said: ‘I joined the library and started reading books – whenever I’m away I always look for books to learn what I can. It involves a lot of pruning, not just branches, but also roots and leaves.
He said it can take up to 20 years for a tree to mature and produce miniature leaves regularly.
To achieve this, he cuts off all the leaves, which “confuses the tree into thinking it’s autumn” and a new set of shoots grows, slightly smaller than the previous one.
The 72-year-old said: “When you feed the trees, they grow back bigger, so you repeat the process every two years.”
Most of the saplings he is looking for are in the tree planting next to Deerbolt, most of which were planted while he was working at the prison with the prison farms and gardens group. Others he saved from gardens.
Mr. Smith also owns a unique Scots Pine that he rescued from the Warcop army firing ranges, after it was cut in half during training.
Mr Smith describes tree work as a form of therapy and said: “It’s a peaceful pastime. I can do it for two to three hours a day at this time of year. In September and October, it decreases a little.
An interesting part of the art is making the trees look older than they are. This includes hollowing out part of the trunk and bleaching it with sulfur.
Mr Smith said: ‘It’s the same in stink bombs – you can’t do it indoors.’
About his mini-bonsai forest, he said: “I don’t sell them – I don’t believe in selling anything that’s alive. From time to time, I let one loose.
“If I sold them, the prices would be exorbitant, if you work on all the time spent on them.”