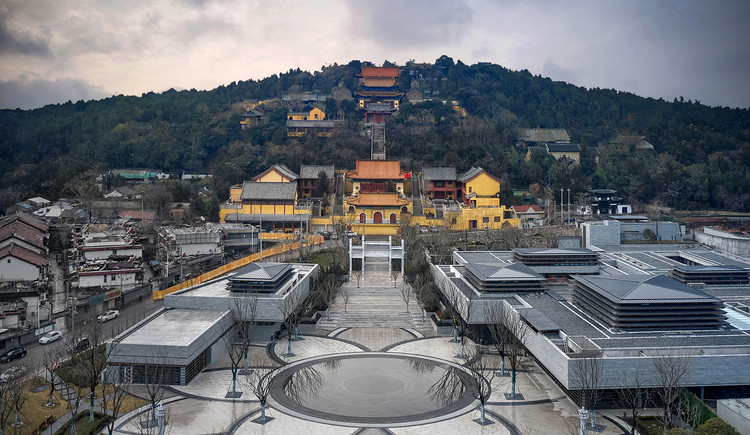 Text description provided by the architects. Usually, the peculiarity and complexity of the site also constitute the facade of the building. This design object is Yunlong Mountain Meditation Hotel, Xuzhou, which is located on the axis of Buddha worship in Xinghua Temple. It has a natural tranquil atmosphere and a superior view of the landscape. The operator hopes the hotel can provide accommodation and business support for guests worshiping Buddha meditation. In this context, our intervention strategy for this site is first to consider following the original environment, then to integrate into it, and finally to create a new “order”.

The site, “Sewing the Gap Between the Ancient Temple and the City. »The site is located on the northern extension of Taishan Road in Xuzhou, at the foot of Yunlong Mountain. There are many historical sites and abundant landscape resources around it. The west side is adjacent to Xinghua Temple, the entrance plaza of an ancient temple and the Xiayuandun Museum on the south side, and the east and north sides are adjacent to the planned creative block across the street. The mountains and towns on both sides of the plot are in a chaotic state of separation. The site’s valuable historical sites are also must-see objects in the design: Xinghua Temple, which was first built in the Tang Dynasty and one of Xuzhou’s Eight Ancient Temples, is located on Yunlong Mountain and is a Zen Buddhist temple. The location of the meditation hotel occupies the gap between the ancient temple and the city, similar to the “observation station” connecting the previous and the next, and offers multiple perspectives of tradition and modernity. The place of Buddha culture at the foot of the mountain is based on the lotus flower, a typical symbol of Buddhism. The vertical dimension of the square is 16 meters from the entrance of Xinghua Temple and 60 meters from the three emperor palaces on the top of the mountain. He uses the terrain to collect the popularity of people, and at the same time serves as a guide and a sign. As the common entrance of meditation and Xinghua Temple, it serves as a venue for Buddhist culture festivals, and also facilitates the interface conflict with urban roads.

Secular life and monastic life “At the foot of the mountain is the earthly daily life, and on the mountain is a site of meditation.” Through a multidimensional analysis of the characteristics of the surrounding environment, the spatial planning basis of “Zen” above and “normality” below is obtained. The foot of the mountain is earthly on a daily basis, hosting commercial blocks, cultural exhibitions, etc., and traces of Zen temples on the mountain, emphasizing stability, relaxation and perception. From bottom to top, the environment forces the mood to move from movement to static. The positioning of the hotel on the theme of “meditation” is in line with the nature of the place. Within this conceptual framework, we actively seek and respond to the order of the Xinghua Temple Millennium Axis, and create a path from “secular life to monastic life”. The main entrance is located near Xinghua Temple on the west side of Yundong Erdao Street, which is relatively quiet, and the entrance is opposite Shanxi Hall across the street. The second entrance is located on Yundong Road on the east side of the plot, which is relatively open, echoing the request to worship Buddha during holidays. Upon entering the hotel, from the outside in, perform a “cleanse” of body, mind and distractions.

Old and new order “Four modern granaries form a new spatial order.”The form and function of the space always conforms to the principle of “Routine below, Zen above”, and responds as much as possible to the original environment with a pitching attitude. Four modern attics form a new spatial “order”. The prototype comes from traditional granaries, pagodas and palaces, echoing the Xinghua Temple on the mountain. The interior is the central functional space, namely the Great Zen Hall, the Vegetarian Canteen, the Zhike Hall, and the Squatters’ Hearth. Others are used as hotel squatter rooms, auxiliary businesses and other functions. The secret eaves of the symbols come from the modern translation of “Ge”, which is square and regular in shape, gradually retracted and folded. “Ge” is the central space of meditation, and the cornice can control the angle of light and interior lighting according to the needs of meditation. The light in the space must undoubtedly be contained, which not only meets the functional requirements but also belongs to the spontaneous expression of the spatial characteristics of meditation. Deliberately compressed on a small scale, the hotel hut emphasizes calm and concentration of the senses, the interior is connected with six courtyards, and other courtyards of different sizes define different spaces, creating a gradual feeling of depth. The framework of a narrow courtyard involves an inner package and a short stay and is equipped with a waterscape, green plants, a dry landscape and bonsai with oriental images.

Material language is “the unity of material features and spatial imagination”. The integration of wooden structures into modern architecture can successfully create the experience of overlapping ancient and modern time and space, taking into account the needs of integration into the environment, abstracting and refining the “wide span” and “cornice and corner” images of the traditional. attics, and forming a new type of eaves that gets rid of the limitations of traditional ideas. The language of wooden structure is also used in the roofs and entrance canopies of central public spaces such as Zen Hall, Vegetarian Canteen, Zhike Hall and the hotel squatter reception area. It is not only a load-bearing element, but also a decorative element, and integrates the interior and exterior vision. In terms of organization and expression, the wooden structure pays attention to the randomly scattered sequence and simple texture, mortise, tenon, lap joint and modern glued wood technology, which is conforms to the principle of restraint and simple visual sense, and retains the unity of material characteristics and spatial image. The facade and part of the walls are made of sandstone and Huanggang rock, creating a typical modern Zen space.

The traditional order is constantly impacted by modern concepts, and its breaking and rebuilding symbolizes vitality. However, the humble integration and restrained expression make the architecture break with the creative limits of individual consciousness, fully absorb environmental features, and realize an intelligent place to convey spirit and interactive dialogue.